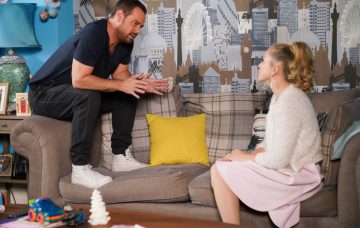 Things might not ever be the same again for the couple...

Mick and Linda desperately try and put everything that has happened over the last few months behind them as the festive season begins… but it seems the reality of what Stuart has put them through is beginning to take its toll.

On Christmas Eve, Linda is left worried when she spots a shifty exchange between Mick and Phil – what could her recently-released husband want with a Mitchell?

But when Linda confronts her husband about the shady meeting, he isn’t very forthcoming with information, leaving her more concerned than ever.

When Linda later makes a shocking discovery she is left terrified about what Mick could be up to.

Will the mystery of where Stuart has gone be unravelled?

After serving time for a crime he didn’t commit, Mick has been on the hunt for revenge, and with Stuart only across the road at Dot’s, he didn’t have far to go for revenge as viewers saw last week.

To make matters worse, Mick isn’t happy about the lengths that Linda had to go to in order to get him out of prison.

While he might be glad that he’s no longer spending time at Her Majesty’s pleasure, Mick is sickened by the fact Linda had to seduce Stuart to get him to confess he actually shot himself.

By the time Christmas Day arrives things are so strained between Mick and Linda that the pair couldn’t feel more alienated from one another if they tried.

With the big day nothing like they’d hoped, they put on a brave face for the Vic karaoke… but it looks like it’s going to take more than a festive sing song for these two to get back on track.

As New Year approaches all is not well in the Carter household. After months of dreaming about what it would be like to be reunited for Christmas, it seems the reality really isn’t what they’d hoped for.

On Friday night, viewers were left wondering if Mick had murdered Stuart off-screen, after a bloody battle.

Or could the season of goodwill be what the Carters need to put the last year behind them and make a fresh start?

Would you like to see Mick and Linda happy again? Leave us a comment on our Facebook page @EntertainmentDailyFix and let us know what you think!