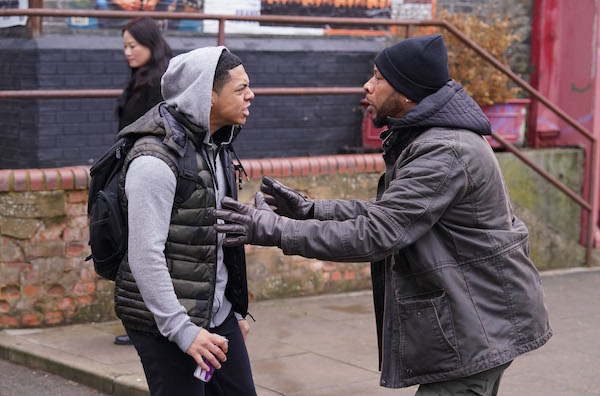 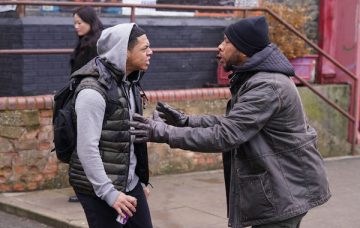 There’s drama heading for EastEnders next week when Keegan Baker puts his life on the line after taking drugs. Will he be okay?

Keegan’s been struggling to cope ever since his best friend Shakil Kazemi was killed in a senseless knife attack last year… and next week sees months of heartache come to a head when his drug abuse gets out of hand.

After Karen Taylor complains about Mitch Baker as usual, Keegan is keen to stand up for his dad, who he has started to bond with over the last few weeks.

But while Mitch is making more of an effort with his estranged son than usual, that doesn’t stop Keegan flying off the handle when he discovers that his dad has been making unreasonable demands on his mum.

As the father and son duo fight in the middle of the Square, it’s all too much for a troubled Keegan and he decides to skip school and heads off to buy drugs from Tiffany.

But when Tiff refuses to help Keegan, he’s left thrown and desperately tries to find another way to get his hands on something to make his day more bearable.

On a drug-finding mission, Keegan spots Tiffany later and heads over again, but this time he forcibly takes a wrap of drugs from her. The only problem is, Bailey has seen everything.

But before the schoolgirl can get help, Keegan suddenly collapses after taking the drugs. But will he be okay?

The following day tensions are running high and Karen is demanding answers from Keegan about what happened.

Karen blames herself for not realising just how desperate Keegan was feeling… but when Mitch admits that he had caught their son with drugs before things quickly escalate and the pair argue.

It doesn’t take long for the finger of blame to start pointing to Tiffany, leaving Bernadette fuming.

Karen heads to the Vic to confront a stunned Whitney, but Whitney doesn’t believe anything Karen has to say and decides to hear what Tiffany has to say for herself.

But despite Tiffany protesting her innocence, the truth is soon revealed when the pair get home and find the police waiting for them.

Meanwhile, Keegan is stunned when his mum doesn’t give him a hard time about the drugs. Instead, Karen tells him some home truths, and he realises that she is right – he needs help.

When Whitney arrives at the Taylors, it looks like World War Three might be about to erupt between her and Karen but, to everyone’s surprise, Tiffany thanks Karen for calling the police because it has opened her eyes to what has been going on.

But while Whitney might think she has got control of the situation, little does she know Tiffany is more vulnerable than ever and is being manipulated by Evie into believing that her family don’t love her.

Just as Tiff hits rock bottom, Whitney is fuming when the school ring and say Tiffany hasn’t been attending. Feeling out of her depth, Whitney tells Tiffany she needs to go home to her mum… but will she go?

Do you think Tiffany should leave Walford? Leave us a comment on our Facebook page @EntertainmentDailyFix and let us know what you think!