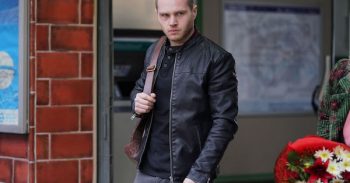 The job in Spain is far from over...

Keanu Taylor returns to EastEnders next week to a warm reception from his family… but it doesn’t take long for trouble to follow him back to Walford.

EastEnders fans will know that Keanu has been in Spain since the beginning of February, doing a dodgy job for Phil Mitchell.

But as time went on and no one had heard from Keanu, everyone started to fear the worst… especially when Phil got a text message confirming that Keanu had been attacked.

Next week sees the Taylors relieved when Keanu comes back in one piece, but after a warm welcome back from his siblings, the mechanic is shocked to get an ear bashing from his mum, Karen.

She is fuming that he didn’t get in touch and left her with sleepless nights wondering what happened to him… but secretly she is just pleased to have her boy back home where he belongs.

But unfortunately for Keanu and Phil, trouble isn’t far behind them when two of Phil’s dodgy acquaintances from Spain manage to track the pair down in Walford.

One face that Phil would rather forget is Danny, who Phil had been working with in Spain and now owes a lot of money too.

The second is Midge, who Keanu spots in the cafe and realises is one of the men who beat him up while he was abroad.

Keanu races to tell Phil that Midge is in town… and Phil isn’t happy when he finds out that Midge has been keeping an eye on Louise and threatening her life if Phil doesn’t pay his debts.

As Phil orders Keanu to keep Louise safe at all costs, the pair panic that she could be in danger if Phil doesn’t get his hands on some cash for both Danny and Midge… and fast.

But Sharon is totally in the dark and doesn’t like the fact that Keanu is hanging around Louise again – completely unaware that he is doing it on Phil’s orders.

Clearly jealous, Sharon tries to talk to Keanu, but he doesn’t want to know and would rather think about the job in hand… but will his attention make Louise think that he has got the hots for her again?

Will Keanu be able to protect Louise and save her from becoming a victim of her dad’s dodgy dealings?

Are you glad to see Keanu back? Leave us a comment on our Facebook page @EntertainmentDailyFix and let us know what you think!