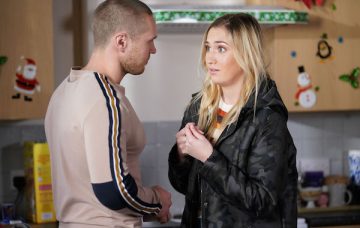 Um, what about Sharon?

There’s forbidden love in the Albert Square air this Christmas when Keanu Taylor and Louise Mitchell share a surprise kiss. But what has happened that’s forced Keanu to have a sudden change of heart over Sharon?

Both Keanu and Louise have been somewhat unlucky in love recently, with Keanu’s steamy affair with Sharon coming to abrupt halt when her husband Phil Mitchell came home from Spain, leading to her fleeing Walford for a trip to Australia.

And while Keanu’s nursing a broken heart while the love of his life is on the other side of the world, Louise isn’t having much more luck as her new romance with his brother Keegan hits the rocks.

The teenagers have embarked on a fledgling relationship recently, but with Keegan getting involved in drugs, it looks like his mind might be elsewhere, leaving Louise frustrated.

To take their minds off their doomed love lives, Keegan has been teaching Louise how to drive, but it looks like all that time in the confined space of a car is starting to take effect.

Christmas Eve sees Keanu think all his Christmases have come at once when he wrongly thinks that Sharon is coming home from Australia.

Not realising that he has got the wrong end of the stick, Keanu rushes out to get Sharon a Christmas present, only to be left heartbroken when he realises his mistake.

But there’s a case of crossed wires when Louise sees the gift and mistakenly thinks it is for her, leaving her secretly touched by Keanu’s generosity.

Knowing that he needs to pull his finger out if he is going to get Louise back in side, Keegan invites her round to his for dinner with the family, but of course – like with every Taylor family occasion – there is plenty of drama.

Keanu struggles to concentrate on the family meal and is thrilled when he gets a voicemail from Sharon… but what is she calling from Australia to say?

Will Keanu be granted his Christmas wish? Or is his festive season about to turn into a nightmare?

What Sharon says is being kept tightly under wraps… but there’s yet more drama to come when Louise tracks Keanu down at the Arches and tries to kiss him.

Despite the fact the heartbroken mechanic tries to put a stop to the kiss, he soon kisses her back.

But what does this kiss mean for Keegan, who would surely be gutted to learn his brother and girlfriend have hooked up?

And does Keanu’s kiss with Louise mean that he is over Sharon already?

EastEnders airs these scenes on Monday 24th and Thursday 27th December on BBC One.

Do you think Keanu is better suited to Sharon or Louise? Leave us a comment on our Facebook page @EntertainmentDailyFix and let us know what you think!