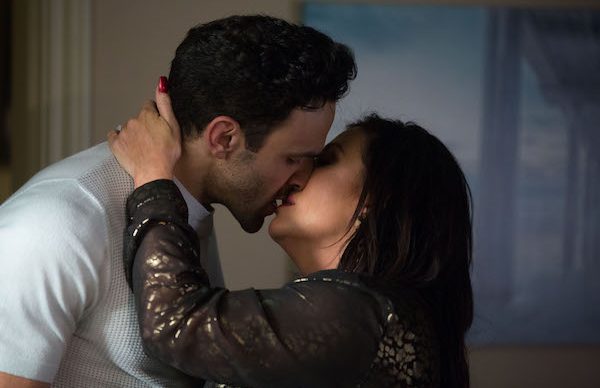 But someone's not going to take the news well...

Kat Slater and Kush Kazemi are set to make their romance official in next week’s EastEnders by announcing to the world – well, Walford at least – that they’re a couple.

But while they’re thrilled to finally make their feelings for each other public at last, the news will break Bex Fowler’s heart.

Next week marks the first anniversary of Shakil Kazemi’s death, and both Bex and Kush struggle with the reminder of losing their loved one.

The pair find comfort in each other’s grief, and as they reminisce at Shakil’s grave, Bex finds her feelings for Kush coming flooding back and she tells him that she loves him.

But little does she know Kush has been getting it on with Kat in secret and Bex’s crush is definitely not reciprocated.

As Kush gently turns down her advances, Bex is left heartbroken and runs off.

But it seems it’s not just Bex who is feeling like Kush is keeping them at arms length… because Kat’s nose has been put out of joint that Kush has stopped replying to her messages.

Trying to forget that Kush is giving her the cold shoulder, Kat goes along to Jean’s hospital appointment to support her.

But when she gets there she’s stunned when Kush arrives to apologise for ignoring her and explains about his heartbreak at losing his brother.

As Kush opens up about losing Shakil a year ago, Kat listens and is a shoulder to cry on.

Realising he needs his family around him, Kat later brings Arthur around to see Kush and he couldn’t be happier.

Spending time with his son makes Kush realise that he wants to go for joint custody of Arthur, and Kat panics, knowing Martin and Stacey will she shocked by his request.

But despite a potential family feud brewing, Kat is thrilled when Kush admits that he thinks they should go public with their relationship.

After a heart-to-heart about their future as a couple, the pair arrange to meet in the pub and tell everyone their news.

But Kush is the first to arrive and is horrified when Bex approaches and plucks up the courage to apologise for her earlier declaration of love.

Kush knows Kat will turn up any minute – will be able to get rid of Bex before she arrives?

Kat surprises Kush and the rest of the pub when she arrives in The Vic and plants a passionate kiss on his lips… making it clear to everyone that they’re a couple.

With their public display there for everyone to see, there’s no ignoring the fact the pair are now officially a couple.

But what will Bex think?