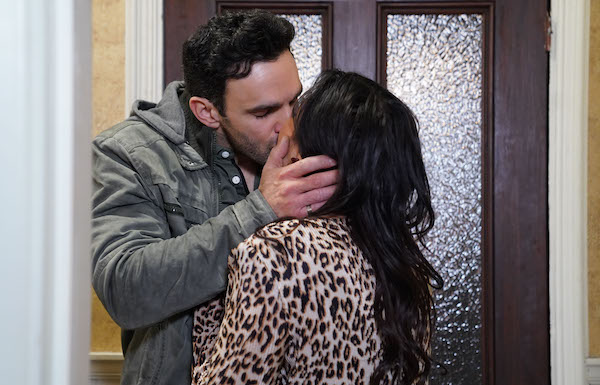 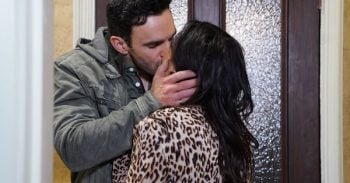 EastEnders SPOILER: Kat and Kush get it on!

The flirting between Kush and Kat has been off the scale over recent weeks, with the pair bonding while Mo Harris was living with Kush.

But before Kat and Kush can enjoy their budding new romance, there is a the small matter of Kat being set up on a blind date with one of Martin’s work colleagues to get through first.

As Martin and Stacey tease Kush about his non-existent love life, Kat can’t help but join in the banter.

But while she is secretly thinking that she would like to help end his romance drought, Stacey has got other ideas.

Determined to get Kat back in the saddle after Alfie’s disappearance earlier this year, Stacey takes matters into her own hands and sets her up on a date with one of Martin’s suppliers from work.

But when Kush gets wind of the blind date, he can’t help but feel a little jealous, knowing that he’s secretly harbouring feelings for Kat himself.

As Kat heads to The Vic for a double date with Martin, Stacey, and Martin’s mystery friend, Marc, it’s clear that an evening talking about fruit and veg isn’t what Kat signed up for.

Poor Marc isn’t a patch on Kush, and when Walford’s very own muscle man arrives in the pub, Kat does her best to make him jealous by flirting with an unsuspecting Marc.

Realising that Kush is the man for her, Kat comes up with a plan to end the disastrous date and reminds Martin of his anniversary in a bid to get rid of him.

She then unceremoniously ditches Marc, before sneaking back to Kush’s flat with him in secret!

As the pair spend the night together, it is clear they’re totally loved up. While they might not have much in common, they definitely have a spark, and the pair agree to try and keep their romance under wraps for now.

But when they struggle to find somewhere to meet in secret, the excitement of sneaking around soon wears off.

With Bex studying at Kush’s flat, his place is a no go zone, so they’re forced to find five minutes of quiet at the Slaters.

But as any EastEnders fan will know, there’s no such thing as peace and quiet in the Slater house, and it doesn’t take long for them to be interrupted.

As one thing leads to another between the new couple, Martin and Stacey arrive home from their anniversary dinner just at the wrong moment.

But with Kat and Kush in the throes of passion, is their secret romance about to be rumbled?