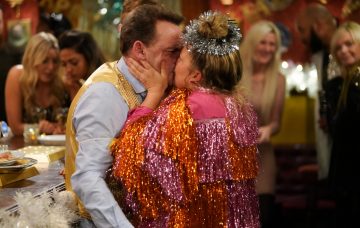 EastEnders Karen Taylor starts off the 2019 with a bang when she snogs Billy Mitchell!

Are these two set to become the next Walford couple?

Karen is living it up as the Square residents party in The Vic ready to see in the New Year.

She’s loud, proud and full of sparkle as she dances on the chairs and makes sure she’s centre of attention.

Billy isn’t looking too impressed as Karen’s raucous behaviour continues, but when has the Taylor matriarch ever cared what people think of her?!

“In true Karen Taylor style, she’s at The Vic at New Year, tucking into the food and drink, she’s the life and soul.

“She also plants a kiss on someone, so she sees in the New Year the way only Karen can,” she told Digital Spy

We now know that someone is a somewhat shocked Billy, as she grabs his face when the bells chime midnight and plants one on him. But will he reciprocate her kiss?

Billy has been trying everything to win back estranged wife Honey Mitchell, but she’s moving on with dentist Adam Bateman, so perhaps it’s time for Bill to move on too?

He and Karen might not be the perfect match, but we can totally see them together.

Meanwhile, Karen’s also got some family strife as 2019 begins, when she realises daughter Bernadette is having problems with Tiffany.

Karen gives Tiff a piece of her mind, but it’s not long before she realises she’s made things worse. Can she make it up to her daughter?

EastEnders is on Monday, Tuesday and Friday at 8pm and Thursday at 7.30 and 8.30pm

Do you think Karen and Billy make a good couple? Leave us a comment on our Facebook page @EntertainmentDailyFix and let us know what you think!