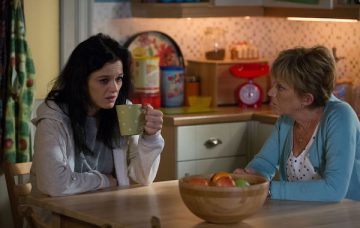 EastEnders SPOILER: Jean finds out the truth about Hayley and Alfie

Jean turns super sleuth and works out who the baby daddy is!

It was a secret that obviously had to come exploding out at some point and it Jean Slater is about to work out that the baby Hayley Slater  is carrying belongs to Alfie Moon.

And – as we all know – Alfie is married to Hayley’s cousin Kat. Even though they’re not together at the moment.

Viewers have known the truth since back in May, but once Jean started digging into Hayley’s past, it was only a matter of time until she put two and two together.

Next week Hayley gets freaked out when she hears about foetal alcohol syndrome from Mariam Arshad while she’s helping take care of baby Archie.

She heads home, panicking about the amount of booze she’s necked since discovering she was pregnant.

Jean is on hand to reassure her that both she and the baby will be fine, but when Hayley lets slip about drinking in Spain, Jean’s brain starts to piece things together.

While Hayley heads out, Jean does some investigating and finds something which seems to confirm her fears.

Is Alfie the father of Hayley’s baby?

When Hayley returns Jean asks her outright – will Hayley finally ‘fess up?

It certainly looks that way because Jean gives her one heck of an ear-bashing causing Hayley to flee the Slater house.

She runs into Keanu in the Square and asks him to go to the park with her, but Keanu is livid when he spots that pregnant Hayley is drinking.

Disgusted with her actions, he lays into her, before he realises just how vulnerable Hayley is.

Hayley storms off, telling Keanu she’s going home. But when she doesn’t turn up back at the Slaters’ Jean is sent into a panic.

Where is Hayley and are she and the baby in danger?

Should Jean tell Kat or keep her nose out? Leave us a comment on our Facebook page @EntertainmentDailyFix and let us know what you think.