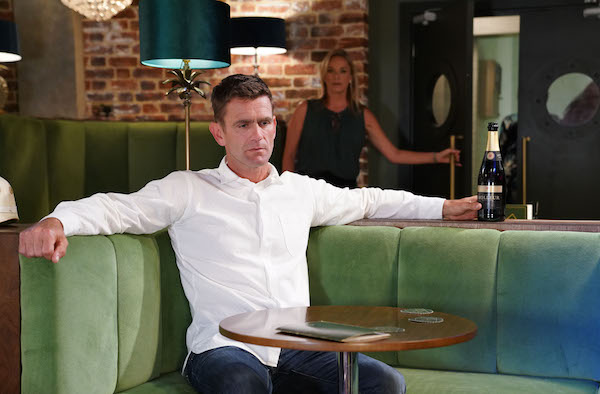 Put the confetti away, guys!

Jack Branning plans to pop the big question to girlfriend Mel Owen next week – but a plot twist pours cold water ALL over his romantic ideas.

After Amy catches him off guard and asks him when he plans to marry Mel, Jack gets thinking…

He mentions the idea to Hunter, who seems encouraging – however, the territorial teen quickly makes a call that is set to change everything for lovebirds Mel and Jack.

In fact, Hunter has contacted his former step-dad. And he soon makes an unwelcome arrival in Walford…

Mel gets a big surprise when her ex-husband Ray Kelly turns up. But why is he REALLY there?

Luckily, they’re soon back on track and Mel, realising what a good man Jack is, teases him about asking the question he’s been planning to ask her.

But, as Jack waits nervously for Mel’s response, Ray arrives leaving her gobsmacked.

It doesn’t take them long to realise that Hunter is behind Ray’s sudden arrival and Ray leaves the club – but Mel can’t hide her panic from a confused Jack.

She covers up by saying she’s concerned about Hunter’s feelings, but it’s clear there’s more behind it. Could she have unfinished business with Ray?

So, if Ray is even a fraction as terrifying as Ciara – who handled her ex Aidan easily enough – then Mel should be worried.