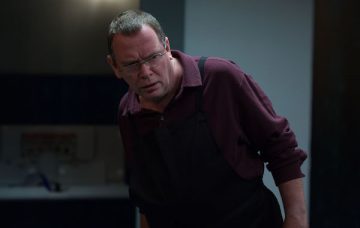 Ian Beale is going to be attacked in EastEnders next week and it will be all Hayley Slater’s fault.

The new mum becomes desperate to hide the fact Alfie Moon is her baby’s father and with Jean Slater losing her grip on the secret it all bursts into a huge drama.

When Stacey realises her mum isn’t coping with something she corners Hayley and demands to know what’s going on.

But when Hayley panics and blurts out Ian’s name, Stacey decides he has hurt her mother and must pay.

Storming around to the Beales she furiously attacks him and demands to know what he has done.

A terrified Ian is confused and it is left to Jean to calm her daughter down by telling her she really likes Ian.

Cleaner Jean has been growing closer to the businessman over the last few weeks after he joined her choir.

On Friday when she went to visit Ian and found him peeling vegetables in darkness, the pairing grew even closer.

He cracked the wine open and the pair opened up to each other, sparks flew and they were soon kissing.

Fans loved the heartwarming scenes and took to Twitter to discuss it.

“Jean and Ian are honestly the weirdest couple but I’m here for it. #Eastenders,” wrote one.

What do you think of Walford’s new couple? Leave us a comment on our Facebook page @EntertainmentDailyFix and let us know what you think!