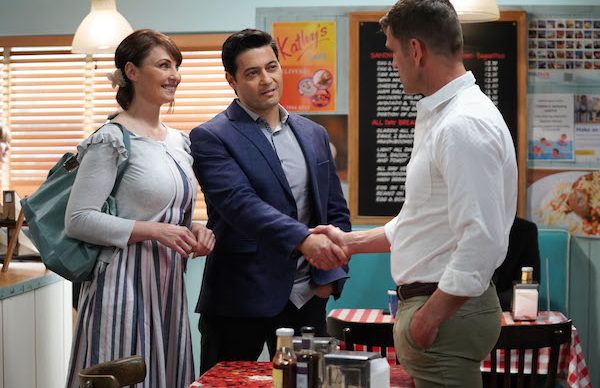 Will he say yes?

Adam has been sneaking around behind Honey’s back with family friend Habiba Ahmed for months… and despite the fact Billy Mitchell tried to warn Honey that Adam was being unfaithful, his claims fell on deaf ears.

So while Honey buries her head in the sand about Adam’s cheating, he has been left free to do as he pleases with Habiba, despite the fact he is now living with Honey and her two children in his fancy new flat.

But next week sees a big twist when Honey decides she is going to pop the question… but, of course, nothing goes quite to plan.

With Mariam aware of Adam’s cheating thanks to Billy confiding in her, she is determined to get Habiba a nice man to marry, convinced it will stop her lusting after Adam.

As the family prepare themselves to meet a potential partner for Habiba, Mariam is nervous and wants everything to be perfect.

But despite the pair being the perfect match on paper, there’s no spark between Habiba and her potential future husband and the meeting is a disaster.

However, it’s not all bad news for Habiba, because seeing her with another man has made Adam jealous, and he confesses that he didn’t like the idea of her finding someone else and promises to break things off with Honey.

Meanwhile, Honey is oblivious to the fact her dentist boyfriend is planning to dump her, and she’s busy thinking of new ideas for decorating the new flat.

As she chats to Linda Carter about her plans, the friends joke about wedding bells not being far off, and Honey is given food for thought.

Deciding that she is going to pop the question, Honey is on could nine. But it seems her world could come crashing down if Adam goes through with his promise of ending things with her in a bid to be with Habiba.

When Honey realises she has lost the keys for the shop, she panics and decides to check the CCTV to see when she last had them.

Realising that she needs Adam’s help, she heads back to the flat to find him, totally unaware that he is in bed with the other woman in his life.

It’s a close call, but luckily for Adam, Honey doesn’t realise what is going on, and once again the dentist has got away with his cheating.

But with the keys still missing, Honey does some detective work and makes a shocking discovery… suddenly finding the keys for the shop is the least of her worries.

Is Adam’s infidelity about to be exposed, or will Honey get down on one knee and ask him to marry her?

Do you think Adam would say yes if Honey proposed? Leave us a comment on our Facebook page @EntertainmentDailyFix and let us know what you think!