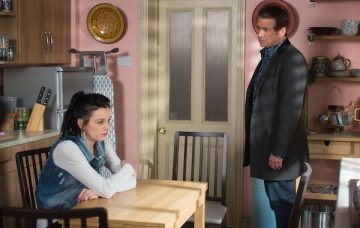 EastEnders SPOILER: Alfie gutted as Hayley puts their baby up for adoption

Dad Alfie Moon is left devastated by her decision...

Alfie Moon recently had the shock of his life when he discovered he had become a dad again.

In Monday’s episode of EastEnders, the have-a-go Walford favourite was overcome with emotions when he realised Hayley did NOT abort the baby which they conceived during a one-night-stand in Spain.

Viewers know that Alfie has returned to Albert Square to give his marriage to Kat another go, after she cheated on him in Spain and caused their son Bert to be badly burnt in an accident.

With more skeletons in the closet than a haunted house at Halloween, it’s no wonder that this Christmas is set to be explosive in the Slater household.

While Alfie wants to fix his wonky marriage to Kat, he has also told Hayley he wants to be a part of the baby’s life (secretly, that is, he never wants Kat to know).

Unfortunately, heartbreak is ahead for Hayley, who clearly has strong feelings for Alfie.

Just as Alfie gets used to the idea of having another child, Hayley makes the drastic decision to put the baby up for adoption.

Everyone at the Slater house is worried about Hayley, who has been struggling with being a new mum – as well as the huge secret she is keeping.

Having moved in with the Ahmeds, Alfie decides to play the hero and bring her home.

But the newly-returned character is left devastated when Hayley tells him that she wants to give Cherry up for adoption.

When his attempts to persuade her otherwise fall on deaf ears, Alfie hatches a cunning plan.

But what will Alfie – played by Shane Richie – do? Could he suggest he and Kat adopt baby Cherry together?

And how will Kat react when she finds out the truth about Cherry’s paternity? Take cover London!

Do you think Hayley will keep the baby? Leave us a comment on our Facebook page @EntertainmentDailyFix and let us know what you think!