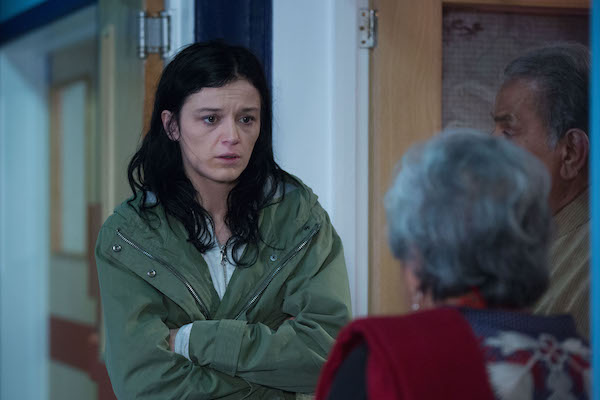 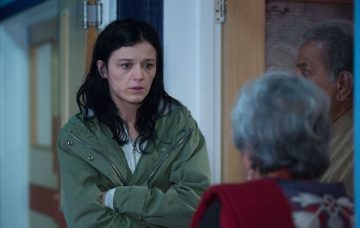 It's all too much for the new mum

Hayley Slater brings her baby back to the Square, but immediately abandons her on the Ahmeds’ doorstep. Will she realise she can be a good mum before it’s too late?

After leaving the hospital, Hayley gets a cab back to Walford, but can’t afford to pay the fare. Carmel Kazemi, who is just about to leave, rescues her, and coos over the newborn.

She doesn’t help Hayley feel any better though, and Hayls sneaks into the Slaters’ to collect up the baby things.

Not knowing what to do, Hayley leaves her little girl outside the Ahmeds’ with a note asking them to look after her. Hayley kisses her goodbye and goes.

Hiding out with her mum, Bev, Hayley makes Bev lie to Kat that she doesn’t know anything. But despite Bev’s reassurances she’s done the right thing, Hayley can’t come to terms with giving up her baby.

Meanwhile, Mariam is caring for the baby, but has lied to Arshad she’s phoned social services to let them know. Mariam’s soon forced to admit Hayley is the baby’s mum, leaving Arshad stunned.

Mariam begs her husband to give Hayley a chance to realise her mistake, and Arshad agrees to one day.

It doesn’t look like it’s even going to take that long when Hayley arrives back on the Square. But as she gazes at the Ahmeds’ contemplating going in, Kat corners her and demands to know where the baby is.

The pressure is too much for Hayley, who blows up and storms off back to her mum. Nice one, Kat!

Stacey isn’t impressed with Kat’s harsh attitude towards Hayley and tells her she needs to be more supportive, giving Kat food for thought.

Over at the Ahmeds’, Mariam and Arshad have noticed something worrying about the baby and rush her into hospital.

Hayley gets the call that her little girl is sick and races down to find out if she’s okay. Fortunately everything is fine and Hayley finally starts to bond with her baby.

Kat turns up to show her support, but when Social Services arrive the family have a fight on their hands to keep the little girl with them.

It’s a huge breakthrough that Hayley even wants to be a mum now, but then Bev turns up and insists she’s taking the baby with her.

Kat is incredulous and tries to make Hayley stand up for herself, but Hayley allows Bev to take Slater junior and follows her without a fight.

Back at home, Bev tells Hayley this a fresh start, but can Hayley really put the past behind her and be a good mum? And is Bev really as caring as she seems?

And, of course, there’s still the almighty bombshell that Alfie is the baby’s daddy to come out – Kat certainly won’t be so supportive then.

Jean worked it out a few weeks ago and we don’t think she’ll be able to keep the secret for long. Do we smell a big Christmas reveal coming?

Should Hayley keep her baby? Leave us a comment on our Facebook page @EntertainmentDailyFix and let us know what you think.

EastEnders airs Monday and Friday at 8pm and Tuesday and Thursday at 7.30pm on BBC1.