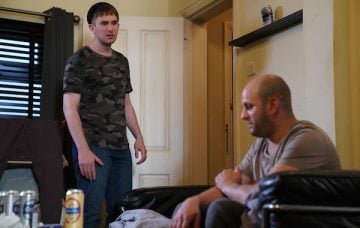 Stuart's only just getting started

Just when it looked like EastEnders’ Stuart Highway couldn’t get any more sinister, he ramps up his vendetta against the Carters next week.

The family are left terrified when a string of sinister goings on start to happen and they wonder if Stuart is the one behind them.

It’s no surprise that Mick’s ex best friend is the one who gets the blame.

His true colours were revealed last month after Tina realised he was the one responsible for the worst night of her life, all those years ago.

He apparently locked her in the boot of a car and left her thinking she was going to die after a game amongst friends got seriously out of hand.

But if the Carters thought Stu was sinister then, just wait until they find out what he’s got in store for them now.

After unexplained things keep happening to Whitney and the Carters, the clan decide to get to the bottom of what’s going on.

Halfway volunteers to go and visit his brother for some answers, but while it is a closely guarded secret as to whether Stuart is behind the mysterious antics, it’s likely that Halfway won’t like what he hears.

It’s no secret that we still haven’t seen the full extent of what Stuart is capable of, with actor Ricky Champ telling Inside Soap recently: “Stuart, Halfway and the Carter family have a big autumn ahead of them – and trust me when I say that Stuart is going to get much, much worse.

“He is going to be driven in order to achieve what he wants.”

What do you make of Stuart’s vendetta against the Carters? Leave us a comment on our Facebook page @EntertainmentDailyFix and let us know what you think!