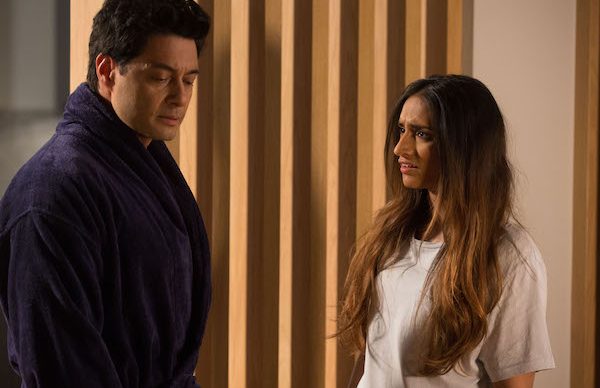 Adam is in a relationship with Honey

Habiba walks out of Adam’s bedroom in just a T-shirt whilst Jack is round… but will he believe Adam’s lie?

After Rainie disappeared with Jack’s savings, Jack has been trying to figure out a way to make money and is given the idea of asking Adam for the cash to buy his flat this week.

EastEnders has shared a video showing a clip from tonight’s episode and have captioned it: “Jack wants Adam to buy his flat, but does he buy his lie? #EastEnders. Tonight. 8:00pm.”

Jack wants Adam to buy his flat, but does he buy his lie?#EastEnders. Tonight. 8.00pm. pic.twitter.com/hdjwNVIb9v

In tonight’s episode of EastEnders (July 15 2019) Jack goes round to speak to Adam saying he will to go down £5000 of the asking price of the flat if Adam can get him the money by the end of the week.

Meanwhile Habiba, who has been having an affair with Adam, is listening to their conversation from Adam’s bedroom.

As Jack and Adam are talking, Jack looks stunned to see Habiba coming from the hallway of the flat in just a long T-shirt.

However, Adam is quick to cover saying his foster-niece simply spent the night on the sofa after she went out and her grandparents would’ve kicked up a fuss because of what she was wearing.

Jack simply replies with, “By the end of the day”, referring to Adam’s decision. Does he believe Adam’s lie?

Adam is in a relationship with Honey Mitchell.

Adam first appeared last year when Honey had a toothache and couldn’t get an appointment at the dentist.

The pair have been together for quite some time now and Honey and her children Will and Janet have recently moved into a flat with Adam, which they plan on buying.

When Iqra and Habiba arrived in Walford earlier this year, it was obvious that Habiba had a crush on Adam.

The pair soon began having an affair behind Honey’s back.

Honey’s husband Billy, who she is separated from, caught Adam and Habiba kissing.

Although Billy has tried to tell his ex the truth, she didn’t believe him.

Last week Honey saw Adam and Habiba sharing an intimate moment through the shop CCTV footage, but he covered telling Honey that Habiba was upset over a guy and tried to comfort her.