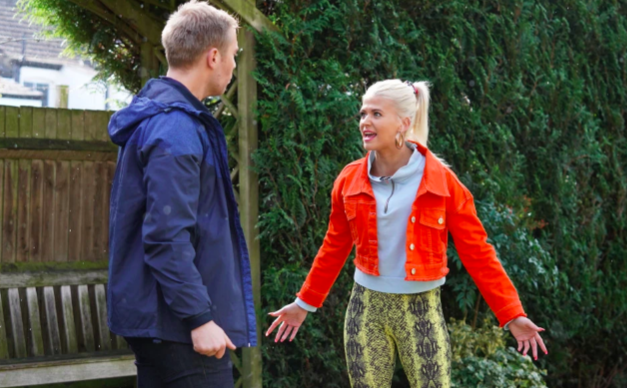 Is Ben's evil plan about to be exposed?

Ben Mitchell has had a bit of a personality transplant since he returned to EastEnders last month.

His plan to take his dad Phil for everything he was worth came to nothing after Phil learned of his son’s duplicitous ways.

And now his plots are going to be hit again when Lola Pearce’s ex Ewan returns to Albert Square – only to reveal how Ben was the one who forced him to leave when he threatened his life.

But if fans thought this would bring about the end to Ben’s evil ways, they might be wrong.

Because when Lola sees her ex has returned, she’s not best pleased.

She is furious he has shown his face again and quickly confronts him about his actions.

Things go from bad to worse when hapless Ewan tells her he’s come back to bring her and Lexi home – a month after leaving them with a psychopath.

That doesn’t go down well and Lola attacks him, enraged at his behaviour towards her and Lexi.

But when her anger dies down, will she listen to what Ewan has to say? And will she realise what Ben did to keep her in Walford to work on his plan?

Ben’s return has been met with mixed reaction from fans since he turned into a villain, supporting human trafficking and almost letting his sister Louise get shipped to Ukraine after his plans to play the big man went horribly wrong.

Fans have hit out at the new incarnation, saying they miss the old, kinder Ben.

One said: “Disgusting how @bbceastenders changed so much of Ben’s personality. He wasn’t really a saint but never was Ben this vile, nasty, threatening, or controlling. They’ve ruined the character beyond redemption #EastEnders”

Another added: “That Ben impostor is a disgusting maniac #EastEnders has RUINED the character 😣😣 #MaxBowdenOut #BringBackHarryReid”

Do you think Ben has gone too far? Leave us a comment on our Facebook page @EntertainmentDailyFix and let us know what you think!