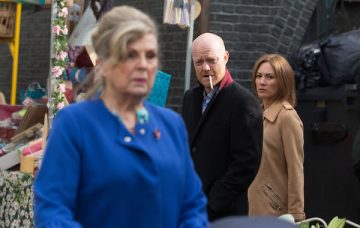 What does this mean for Max's battle for custody?

Cora Cross is set to make a dramatic return to Walford next week as EastEnders reveals a new twist in Max and Rainie’s custody battle for baby Abi.

Ever since Max’s daughter, Abi Branning, met an untimely end last Christmas after falling from the roof of The Vic with sister Lauren Branning, her baby daughter has been left without a mother.

Max has made it his mission to get custody of baby Abi and raise his granddaughter with the help of wife Rainie.

But of course there’s a Cora-shaped spanner in the works because as the baby’s great grandmother, she also wants custody of the child.

Next week EastEnders fans will see Cora back in Albert Square, leaving Max and Rainie wondering what she’s planning.

Their fears seem to be confirmed when they spot Cora going into Ian Beale’s house, and they’re left panicking about what Cora could possibly want with him.

As Ian and Cora talk, Rainie and Max barge into the house, demanding answers – but something tells us they’re not going to like what they hear.

Just when it looks like their plan to be a family with Abi are over, things take another turn for the worst when Max discovers his solicitor has been fired.

But there’s a silver lining for the Brannings when Max gets himself a new lawyer and they seem to think he has a good chance of winning his battle for his granddaughter.

And at the same time, things aren’t looking good for Cora.

She’s struggling to cope with the demands of looking after a little one, and after a mysterious incident in the Square that leaves her rattled, the cracks are clearly starting to show.

Desperate to hide the fact she can’t cope from Max, Cora confides in Martin, who promises not to tell the Brannings what’s happened.

But will Cora’s unlikely confidant keep his promise and make sure Max doesn’t find out about her problems?

Watch these scenes on EastEnders next week from Tuesday 6th November.

What do you think Cora and Ian are hiding? Leave us a comment on our Facebook page @EntertainmentDailyFix and let us know what you think!