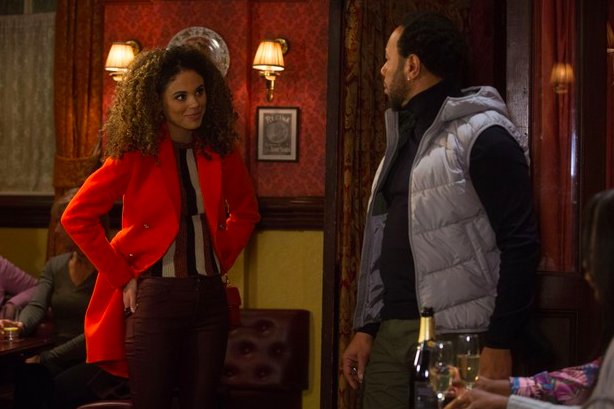 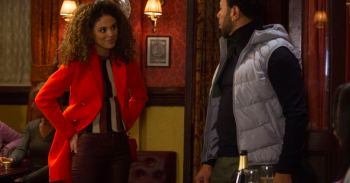 EastEnders SPOILER: First look at Chantelle Atkins arrival as she clashes with her estranged dad Mitch

It's not set to be a happy family reunion

The first look at Chantelle Atkins in EastEnders has been revealed.

Daughter of Karen Taylor and Mitch Baker, Chantelle is set to rock the Square when she arrives later this month.

And now it has been confirmed she will clash with her dad Mitch when she helps Denise Fox and Kim Hubbard beat him during a competition for Patrick Trueman’s business investment.

Denise, Kim and Mitch are told to open up competing pop-up salons so Patrick can see who has a more viable business he can invest in.

And unbeknown to everyone, Denise and Kim recruit a head stylist who just so happens to be Chantelle.

The character’s arrival looks fraught as Mitch doesn’t know what to say to his eldest daughter.

It was recently announced Neon Jungle’s Jessica Plummer would be playing Chantelle but she won’t be arriving on Albert Square alone.

Chantelle will be later followed by husband Gray and children Mia and Mackenzie.

But all will not be well during the family reunion as tension between Chantelle and her mother quickly becomes apparent.

Chantelle is very protective over her siblings, so how will she react when she realises Mitch is now a big part of all their lives after being absent?

Gray will be played by Toby-Alexander Smith. Gray was Chantelle’s ticket away from life with the Taylors. He’s a successful solicitor in the City of London and loves nothing more than coming home to his family.

Fans may recognise Toby from Doctors. He has also appeared in numerous other TV shows including Krypton, Berlin Station, and Flack.

Speaking about joining EastEnders, Jessica said: “Just like a majority of the UK, I grew up watching EastEnders. It’s an absolute honour to be joining the cast with all my favourites… Rickaaaaaaaay”.

Are you excited for Chantelle’s arrival? Leave us a comment on our Facebook page @EntertainmentDailyFix and let us know what you think!