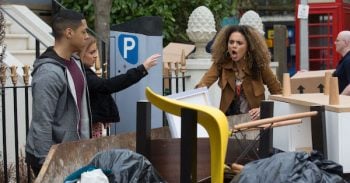 It was bound to happen eventually

Chantelle and the rest of the Atkins family move into their new home on Albert Square next week… but it doesn’t take long for Karen to rub her daughter up the wrong way.

EastEnders fans will know that Chantelle found herself in hot water with Kim Fox after husband Gray surprised her by buying Number 1 Albert Square for them and their two kids to move into.

Despite being thrilled that she was about to move into the biggest house on the Square, Chantelle unwittingly put her foot in it with co-worker Kim when she was rude about the decor, not realising that Kim is the one who lived there last.

But just when it looked like the pair might have got past their differences, Karen manages to cause trouble between the salon workers next week as Chantelle and her clan move in.

As Chantelle takes control of the move, she is fuming when her mum meddles and starts trying to sell some fo Kim’s belongings.

Chantelle can’t believe that her mum would stoop so low and the pair fight… especially when Chantelle spots the portrait of Kim, Vincent and Pearl wearing togas in the skip.

The hairdresser knows that seeing her family photo in the skip isn’t going to go down well with Kim, but as Chantelle tries to retrieve it from being dumped, Kim arrives and catches her red handed.

The pair fight and Chantelle is horrified when Kim and Karen start having a slanging match in the middle of the Square.

Just as she is starting to wonder if moving to Walford was such a good idea after all, Chantelle is mortified when Gray arrives at their new home with their kids, only to find everyone shouting.

Embarrassed that Gray has seen her mum at her worst, Chantelle shares some harsh words with Karen about what she really thinks of her.

But as Chantelle’s true feelings are revealed, has she gone too far and ruined her relationship with her mum just hours after moving in across the road from her?

Are you looking forward to the Atkins family being on the Square? Leave us a comment on our Facebook page @EntertainmentDailyFix and let us know what you think!