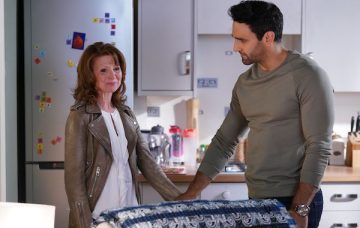 Carmel Kazemi is leaving Walford next week and it’s going to be emotional.

After three and a half years on the Square, Carmel feels she needs a fresh start following the devastating death of her son, Shakil.

Shaki was stabbed and died as a result of his injuries. Carmel has been campaigning against knife crime ever since, but she has finally decided to give that up and focus on her grief away from Walford.

But she doesn’t want any of the residents to ever forget her son, and she wants his death to continue to teach lessons long after she’s departed.

She’s already organised a poster in his memory, but has been embroiled in a battle with Keegan Baker after he discovered the poster was defaced.

When Carmel refused to take action over the vandalism, Keegan decided to take matters into his own hands. After he located the guilty party on social media he came up with a revenge plan.

Carmel can tell something’s wrong with Keegan and rushes off to find out what he’s doing – but will she become embroiled in his revenge?

With Keegan and Shaki on her mind, before she goes Carmel wants to gift sentimental items of Shaki’s to various residents on the Square who meant something to her son.

Carm then shares an emotional goodbye with Kush before stepping out to take one last look around the Square – and at Shakil’s poster.

But ever the good neighbour, Carmel has time to do one last helpful thing before she goes.

When she spots Hayley Slater, and her newborn daughter, getting out of a cab, but unable to pay the fare, Carmel steps in.

She pays the cabbie, then lovingly takes the baby for a cuddle.

With hope about the new life about to begin in Walford, Carmel gets ready to leave – but will she go without any last drama?

The last we’ll see of her is on Monday 5 November, and we’re already hoping she’ll be back.

Actress Bonnie Langford confirmed her exit back in July, and has since announced she’s going back to her roots by returning to the West End to star in 42nd Street.

Will you miss Carmel? Leave us a comment on our Facebook page @EntertainmentDailyFix and let us know what you think.

Coronation Street airs Monday, Wednesday and Friday at 7.30pm and 8.30pm on ITV.