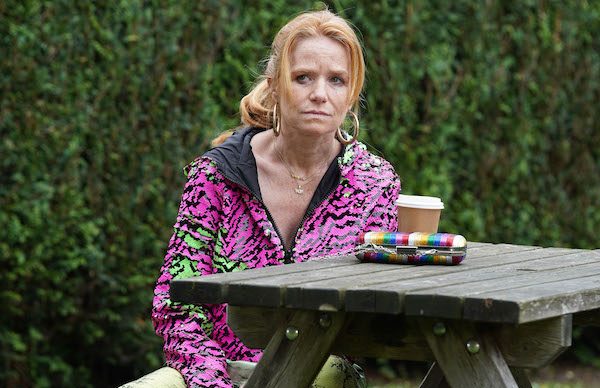 It doesn't take long for her to start causing trouble

As always with EastEnders favourite Bianca Jackson, trouble seems to follow her wherever she goes next week when she makes her big comeback for Whitney Dean’s wedding to Callum Highway.

As the day of Whitney and Callum’s doomed wedding arrives, the bride and groom are at loggerheads over Callum’s recent confession that he had a fling with Ben Mitchell.

But while Whitney is still deciding whether to go through with the wedding or not, Sonia is worried when Bianca seems to have disappeared off the face of the earth.

Sonia is really excited about surprising Whitney with Bianca’s arrival for her wedding, but when Bianca goes missing everyone starts to worry that the plan is going to backfire.

Eventually the news that Bianca is back reaches Whitney and she is thrilled. But when she realises no one has seen Bianca all day, she’s a little miffed that she has gone missing on her big day.

All ready in her wedding dress, Whitney is adamant that she won’t be getting married until they find Bianca, and the family are soon on a mission to find the wayward returnee.

Eventually they track her down with Kat and they arrive at the venue just in time for the wedding… but with Whitney still in two minds about marrying Callum, will the ceremony go ahead?

However, while Whitney might be pleased to see Bianca, the same can’t be said for everyone.

Tiffany is far from impressed to see Bianca back after her lack of support following what happened earlier in the year with Evie, and soon Bianca is being given a harsh reality check from sister Sonia about not being there for her daughter.

Worried about what has been going on with Tiffany, Bianca takes her outside to talk.

But with everything that has happened with Tiffany in the last few months, is it all too little, too late for Bianca to start taking an interest now?

She might have only been living down the road in Milton Keynes, but from the amount of support Bianca gave to her troubled daughter while she was being groomed by Evie and her gang, she might have well been on the other side of the world.

Can the pair patch up their relationship before Bianca leaves Walford again?

Do you think Tiffany will be able to forgive her mum? Leave us a comment on our Facebook page @EntertainmentDailyFix and let us know what you think!