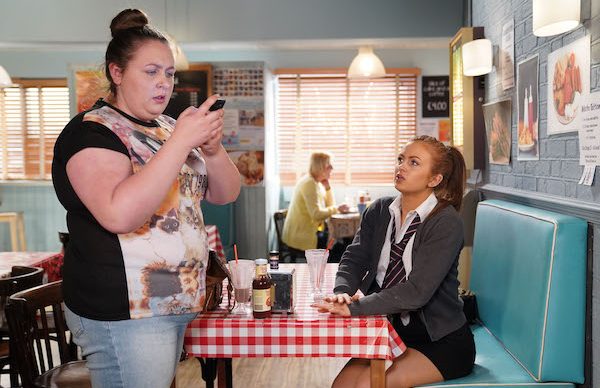 A big secret is about to be exposed

There’s drama in EastEnders next week when Bernadette Taylor realises best friend Tiffany Butcher has been lying to her.

With Tiffany’s feelings for Keegan Baker growing over recent weeks, the teenager has been left feeling guilty about focusing on her new love interest instead of best friend Bernie.

And to make things worse, Tiffany was shocked to find out that Bernie’s new romance with Brooke had come to an end because Bernadette confessed she was still in love with Tiffany.

With Bernie, Tiffany and Keegan all caught up in the messy love triangle, Tiffany decided the best thing for Bernadette to do was get back in the dating game and encouraged her to start online dating again.

Determined to make Bernie feel good about herself Tiffany set up a fake profile as someone called Sophia and it wasn’t long before she was chatting to Bernadette under her pretend persona.

But what Tiffany didn’t count on was Bernie falling for fake Sophia hook, line and sinker… something that is going to land Tiff in huge trouble next week.

While Bernie obsesses over Sophia, Tiffany feels guilty about her best friend lusting after someone who doesn’t even exist… but with Bernie’s attention on Sophia, it means she has got more time to focus on making amends with Keegan.

Tiffany is shocked to realise just how into Sophia Bernie really is… but just as she is wondering what she’s going to do if Bernie asks Sophia to meet up, Bernie starts to realise her best friend is acting suspiciously.

As she spots Tiffany messaging as Sophia, Bernie is devastated that her whole online romance has been totally fake and set up by her best friend.

She’s heartbroken that not only is the person she thought she was getting on well with isn’t real, but she has been falling for Tiffany’s flirty banter, the one person she was making an effort to move on from.

Tiffany feels bad that her actions have upset Bernie so badly and she goes to see her at home, trying to explain why she faked an online profile.

But with Tiffany constantly messing around with Bernie’s heart, is this one betrayal too many for the friends?

Do you think Bernie will forgive Tiffany this time? Leave us a comment on our Facebook page @EntertainmentDailyFix and let us know what you think!