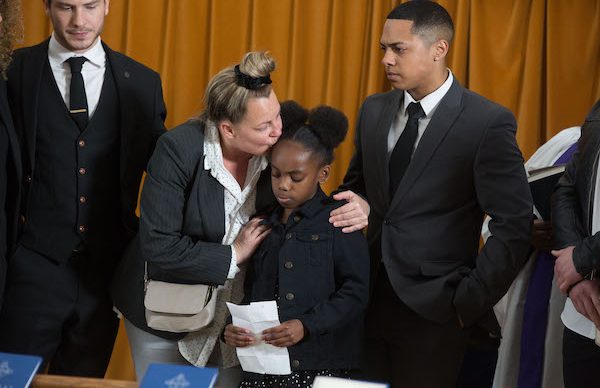 It's the day everyone has been dreading...

Nine-year-old Bailey Baker is made of tough stuff, but as her mum Dinah Wilson’s funeral approaches in the same week as her 10th birthday, she’s about to embark on a rollercoaster of emotions yet again.

Soap fans have seen EastEnders‘ Bailey struggling since her mum took her own life following a battle with MS, but as always the schoolgirl has amazed everyone around her with her resilience.

Before coming to Walford, Bailey had been caring for her mum singlehandedly, while also jugging going to school and doing her homework.

But sadly it was all too much for Dinah, and she took matters into her own hands last month, deciding to end her suffering herself.

Karen was the only one who knew that Dinah was planning to end it all… something she has been struggling with ever since Dinah’s suicide.

Next week will see the busy mum head off to the inquest into Dinah’s death… but will anyone suspect foul play?

As the Taylors all gather to make Bailey’s 10th birthday one to remember for all the right reasons, everyone is on egg shells, desperate to make up for the fact that she doesn’t have the one birthday gift that she would like… her mum.

As everyone puts on a brave face for Bailey, the family are stunned when they see Dinah’s card for her daughter, and Karen quickly intervenes, worried that it would be too much too soon for Bailey after her mum’s death.

But Bailey amazes everyone by wanting to read the card, and eventually Keegan is the one who takes on the challenge of reading it out to his sister.

But when he breaks down with emotion, it is Bailey who steps up and reads out the words her mum wrote only a few weeks before.

The following day is Dinah’s funeral, and as the service gets underway, everyone is shocked when Bailey announces she wants to say a few words.

But understandably it is all too much for the 10-year-old and the Taylors all step in to give her the support they need, united in their grief.

However, with the funeral over, where will this leave Bailey? Will she continue to stay strong and move forwards with the help of the Taylors?

Or will the reality of what has happened to her mum hit now that they have said their final goodbyes?

Are you glad the Taylors have taken Bailey under their wing? Leave us a comment on our Facebook page @EntertainmentDailyFix and let us know what you think!