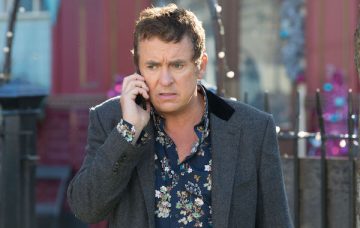 Who does his heart really belong to?

With Christmas on the way, Alfie Moon is a man on a mission trying to make it the best festive season the Slaters have ever seen.

There’s just one problem though – no, not the fact this is Walford and perfect Christmases don’t exist – it’s the secret that he’s Hayley’s baby daddy that is about to shatter everything.

As newly-returned Alfie delegates different jobs for Christmas to a gang of bemused Slaters, it looks like his plan to make Kat happy might just work.

But it doesn’t take long for Jean to rain on his parade, telling him that they can’t live a lie for much longer.

Having finally got his head around the fact he’s got a daughter, Alfie insists to Hayley that he wants to be part of their baby’s life.

Hayley is clearly torn about what to make of his confession – but the pair start to bond as they think of a name for the little one at last.

But Alfie’s got the biggest juggling act on his hands ever when he then shares a moment with Kat and the pair eventually kiss.

But if they’re an item again, where does this leave Hayley and the baby?

Jean isn’t happy when she sees Alfie cooing over the baby – knowing it is only a matter of time before the secret comes out, and that all hell will break loose when it does.

But seeing how happy Kat is to have her man in the moon back in Walford, will Jean really turn her world upside down by revealing everything?

Hayley frets to Alfie that Kat’s going to guess the truth soon, rightly warning him that the people who will get hurt the most from the bombshell is the kids.

But as the pair come to blows, Hayley can’t take the pressure any longer and turns to Jean and Bev for help.

With neither of the women answering her calls, Hayley packs a bag and decides it’s time for her to leave. We’ve been here before – but will she really go this time?

Do you think Alfie should be with Hayley or Kat? Leave us a comment on our Facebook page @EntertainmentDailyFix