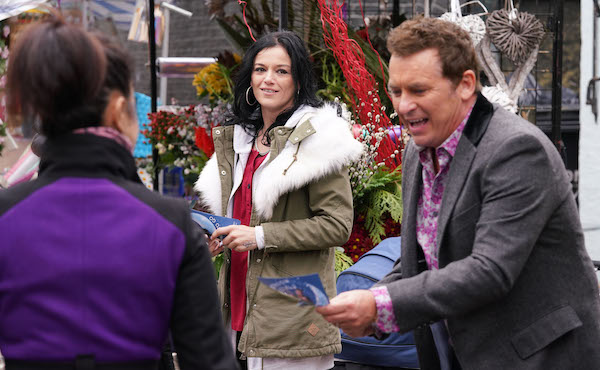 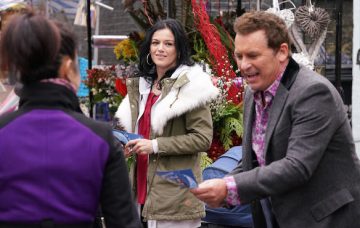 He's torn between the Slater girls

Alfie Moon is back and has nailed his colours to Kat’s mast insisting he wants them to be a family again.

But when he discovers he has a secret daughter with Kat’s cousin Hayley, he finds himself torn and desperate to be a dad to his little girl.

And as he charms Hayley into letting him be a part of the baby’s life, could he end up ditching Kat for Hayley?

Alfie turns up on the Slaters’ doorstep in the middle of Hayley’s surprise birthday party.

Jean’s not impressed to see him and tries to throw him out before he sees Hayley and figures out the truth about their baby together.

But Alfie’s not giving up and manages to sneak back in later to talk to Kat. He wins her round and she finally gets to see her kids again, but will she agree to forgive Alfie and try again?

However, it’s later on when he finds himself cuddling the baby that he discovers Hayley’s her mum – and quickly puts two and two together to work out he’s the daddy.

Hayley fumes at him as he asks for answers, believing she had an abortion. He’s forced to distract Kat so he can properly talk to Hayley and he tells her he’s back for Kat and Kat alone.

But he then insists he wants to be part of the baby’s life, but Hayley refuses to allow it, threatening him that she’ll tell Kat everything.

Alfie takes his mind off things by going headfirst into his new venture Blue Moon Funerals and he even convinces Hayley to help him out.

As the pair work together, she falls for his patter and charming ways once again and starts to soften when she realises how much their daughter means to him.

Jean’s fuming to see them together and growing closer, but she tries to stay out of it. Is she right to be worried? Is he leaning towards Hayley over Kat?

It doesn’t seem so when he later tries to impress Kat again and makes a touching gesture.

Hayley, obviously thinking he might be close to choosing her instead, is crushed that her family dream is over.

Alfie and Jean realise how gutted she is and as Alfie tries to worm his way back in, Jean bursts in and insists they have to come clean to Kat.

Will Alfie tell Kat the truth? Will it force him to choose Hayley? And can the Slaters ever recover from what he’s put them through?

Should Alfie be with Hayley or Kat? Leave us a comment on our Facebook page @EntertainmentDailyFix and let us know what you think!

EastEnders is on Monday and Friday at 8pm and Tuesday and Thursday at 7.30pm on BBC One