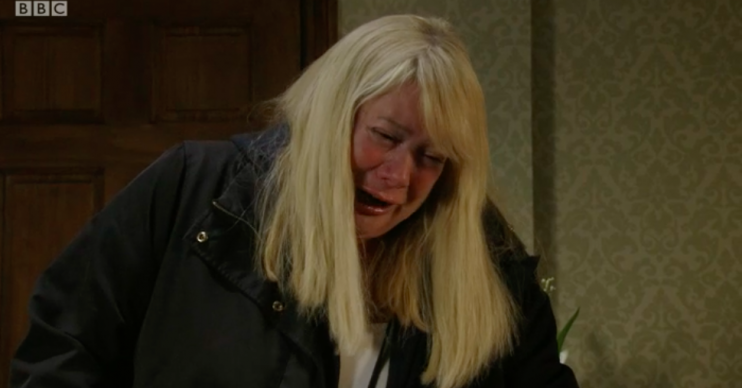 The Walford matriarch lost her son Dennis Rickman Jr during last month’s dramatic Thames boat disaster, and has been deep in grief ever since.

In devastating scenes aired on Tuesday (March 17), EastEnders fan favourite Sharon said goodbye to her son as he lay in a closed coffin at the undertakers.

This was the most heartbreaking scene since the boat week.

In between sobs of remorse, she told him: “Oh my baby, I just want you to know that I am so proud of you. I know how brave you were that day on the boat.

“You know I meant it when I said it was just going to be me and you from now on. We were going to have a whole new life together. I had it all planned.”

Read more: EastEnders and Coronation Street fans criticise soaps for being out of touch amidst coronavirus crisis

She continued: “I was going to get us a place away from here. A fresh start by the coast, just me and you. But that’s all been taken away, I can’t change anything. I am so sorry.

“I would give my life for just one more hour with you. But I can’t.

“You know your dad would have been so proud of you too. And the only good thing to come out of all of this is that you can be together now. You go to him my darling. You go and rest in peace with your daddy.”

EastEnders fans were in bits as she ended the tearful message by saying: “I will never, ever love anybody like I love you.”

In more distressing scenes later in the episode – which had been delayed due to a coronavirus update – Sharon then made the horrible decision to give away her newborn son.

Overwhelmed with grief for her dead son Dennis, Sharon handed baby Kayden over to his grandmother Karen Taylor, telling her: “I want you to have him.

Those watching from home were heartbroken by the scenes, with one tweeting: “Bawled my eyes out. Letitia is outstanding.”

Another said: “THIS was the most heartbreaking scene since the boat week.”

A third added: “Brilliant acting. Had me sobbing. Letitia Dean is a star.”

“This scene gave me absolute goosebumps,” said one more, while another said: “OMG this was heartbreaking.”

Bawled my eyes out 💔😭 Letitia is outstanding 👏

That scene in the undertakers was heartbreaking 💔

On Wednesday (March 18), an EastEnders spokesperson confirmed that the BBC soap has STOPPED filming because of the coronavirus pandemic.

A statement read: “In light of the spread of COVID-19, after much consideration, it has been decided that filming on EastEnders will be postponed until further notice.

The statement continued: “Please note our episodes will now air on Mondays at 8pm and Tuesdays at 7.30pm with immediate effect.”

ITV soaps Coronation Street and Emmerdale have yet to postpone filming.

“We’re keeping a close eye on the situation and putting our people first.”

Coronation Street has also banned kissing scenes to help stop the spread of the virus amongst their actors.

EastEnders will now air on Mondays at 8pm and Tuesdays at 7:30pm.

How do you feel about this news? Leave us a comment on our Facebook page @EntertainmentDailyFix and let us know what you think!