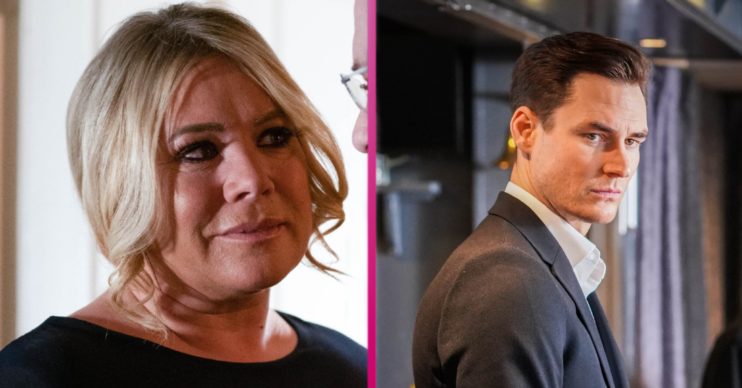 EastEnders: Sharon and Zack will have incestuous romance, fans predict

Sharon previously had a relationship with her adoptive brother Dennis

EastEnders fans are predicting a shocking incest storyline for Sharon and Zack.

Earlier this week Kathy was told her ex-husband, Gavin Sullivan, had died. Kathy went to tell Gavin’s biological daughter Sharon about his death.

Although Sharon didn’t want to go to the wake, she later changed her mind and she and Kathy went together.

At the wake, a guy named Zack made a huge speech about Gavin calling him twisted and saying he can “fry in eternal torment” and all his family can join him.

However this didn’t go down too well with Gavin’s family and friends and Zack was chased out of the wake.

As Sharon and Kathy left, they noticed Zack was hiding in the back seat of their car. As Gavin’s family and friends smashed up Zack’s car he got talking to the two women.

When Gavin’s family were done with Zack’s car, he went back over to his vehicle.

Read more: Who is Gavin in EastEnders and why do Kathy and Sharon hate him so much?

But when Kathy asked how he knew Gavin, he told them that Gavin was his dad and Sharon was shocked to realise Zack was her brother.

However EastEnders fans are convinced that despite Sharon and Zack being related, romance could be on the cards.

Does anyone want to remind Sharon what happened the last time she met a long-lost brother at a funeral… #EastEnders pic.twitter.com/ytb2cZifuC

Sharon over here lusting after her brother…and they have chemistry….again…LOL this show. #EastEnders

EastEnders: What’s next for Sharon?

After the funeral, Kathy mentioned Zack being family but she was sure he was trouble. Later Kathy handed Sharon Zack’s number.

In tonight’s episode (Thursday, March 18) Kim throws Sharon’s leaving party but it’s quieter than expected. Kim tries to get people to sign up for her dating services.

Kim is later forced to admit she put the wrong date on the invites, but Sharon isn’t upset.

She’s finding it hard to say goodbye to The Vic again. Will she contact Zack, or will she never see her brother again?