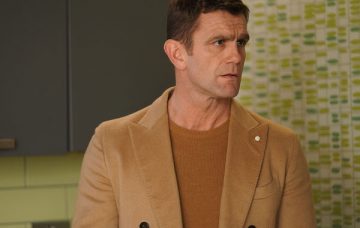 Scott Maslen, the EastEnders actor, has slammed moaning soap stars who say they are ‘overworked’.

Scott has played Jack Branning in the soap since 2007 and before that did a five-year stint on The Bill, so he is no stranger to working in high-pressure telly environments.

Read more: Adrian Edmondson has joined the cast of EastEnders

And with his history of putting the work in, he has no sympathy for actors who like to moan about the job being too tough.

Speaking to the Sunday Mirror, Scott revealed the advice he gives other soap actors and actresses when he sees them getting out of line with their complaints.

He said: “Get a grip. Turn up and put the work in. It is hard work.

“But go and work on a trawler or deliver the milk. Be thankful and understand where you are at.”

It comes as rival soap Coronation Street was reportedly plunged into crisis amid the cast being required to work weekends as part of their gruelling schedules.

Soap fans backed his comments and echoed his points.

One said, in the comments section on Digital Spy: “He has a point. If he’s talking about his co stars, they also got to think how bad it is at Corrie atm too! Corrie are doing six episodes a week and EE are doing four.

“I see if people have a moan or complain at the same time. However, they have to think how lucky they are to have such a good, worthwhile, well paid job. Barbara Windsor felt the same as Scott and I’m sure some others do too.”

A second said: “I’m not entirely sure I’d agree with the phrase overworked. To me, public services, nurses, fire fighters, police, paramedics, teachers etc, are the ones who are overworked and immensely underpaid and undervalued.

“I fear that in a lot of these complaints, some of the actors are developing a sense of their own importance.”

The telly fan continued: “Yes, they may not have found that acting is not the glamorous world they believed it would be, but they are being paid better than average for it, not to mention the advertising and reality TV payments it will open up once they do leave.

“Quite frankly, I believe they need to grow up and have some gratitude.”

Do you agree with Scott? Leave us a comment on our Facebook page @EntertainmentDailyFix and let us know what you think!