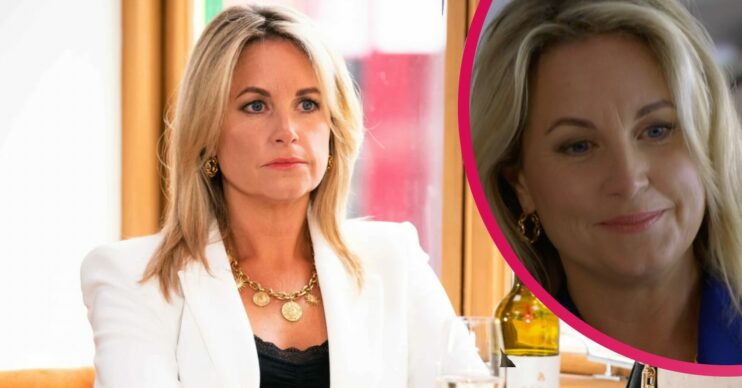 EastEnders’ Sam Mitchell: Fans are all saying the same thing about her return

She came strutting into Walford nick in a teeny dress, attracting a lot of admiring glances.

Phil grinned as his younger sister arrived, quipping that their mum would have sent her back home for going out dressed like that.

What are EastEnders fans saying about Sam’s return?

Viewers were loving Sam’s return, with many hailing it as iconic on Twitter.

“What a scene, SAM IS BAAAAACK (and how good does Kim Medcalf look, oh my days),” another tweeted.

Another wrote: “When the iconic Sam Mitchell entered the room, the whole room,” along with a cheeky GIF reacting the same way as the inmates did.

And a fourth added: “Sam Mitchell back on EastEnders, oh it’s a big YES from me.”

Sam turned out to be the ‘international call’ Phil made as he played Keeble, pretending he was going to enter a plea deal.

But Phil has no intention of turning into a grass, leaving the detective – and lawyer Ritchie – less than happy.

With Ben crumbling, Sharon already juggling work and motherhood and Kat unable to cope, is Sam back to take control of the Mitchell business empire?

Viewers are asking one important question though

This move has left many fans asking the same question though. Why didn’t Phil call his brother, Grant?

“Sorry but in what reality would Phil call Sam over Grant?” pondered one EastEnders fan.

“I was hoping for Grant ..Maybe soon then the ‘ole faaaamly will be back togeva [sic]” said another.

And a third added: “When Phil said Miss Piggy I thought it was Sharon he meant. Can’t believe taking the deal was a double cross… Sam coming back facilitated though! But in real life he would call Grant.”

Sam’s comeback was announced earlier this year, causing a bit of controversy over Kim Medcalf returning for the role.

She took to Twitter to voice her fury, saying: “Wishing Kym [sic] the best of luck at EastEnders. Yet again this poor woman has to recreate a Samantha Mitchell as close to my last two recent comebacks on the Square go smash it darling..x

“Oh but not to EastEnders, my legal team will be in touch.”

Danniella appeared as Sam in 1990 but, following some turbulent times off-screen, Kim replaced her in 2002.

Sam made another comeback in 2009, this time played by Danniella.

And she was last in Walford in 2016 for mum, Peggy’s, funeral – also played by Danniella.

She returned to Spain, leaving son Ricky with his dad, Jack Branning, unable to cope with motherhood.

Sam’s arrival in the Square is set to ruffle a few feathers.

Spoilers have been teasing that she’s set to clash with Kat and Sharon immediately.

And how will Jack and Ricky take her return?