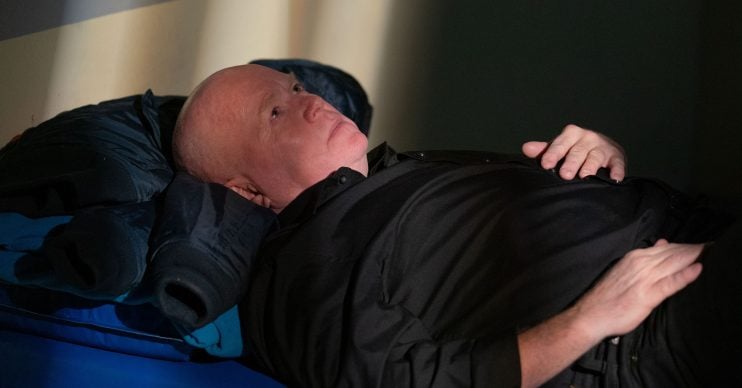 Phil Mitchell's in trouble so Ritchie's back to save the day

EastEnders has confirmed the comeback of legendary lawyer Ritchie Scott when Phil Mitchell finds himself banged up next week.

Following Phil’s return to Walford tonight, the events of recent weeks are weighing heavily on his mind.

He takes drastic action and hands himself into the police, admitting he was responsible for the boat crash that claimed the life of young Dennis Rickman Jnr.

Read more: EastEnders: Sharon attacks Phil with a knife as he returns

In EastEnders on Monday, April 6, Phil wakes up in a police cell.

That’s when solicitor Ritchie Scott swoops in to help him avoid another conviction.

Phil has turned himself into the police this time, which could cause even super-solicitor Ritchie a huge problem…

Admitting he was responsible is one thing, but it could also prove Phil did attempt to kill Keanu at Christmas – something Phil has been on the run for.

Can Ritchie do anything to save Phil from a double conviction?

Who is EastEnders’ Ritchie Scott?

She has helped the Mitchell family out of many a tight spot legally over the years.

She first appeared on the scene in 2005 when she advised Phil’s mum, Peggy, ahead of Phil’s trial for armed robbery.

After original lawyer Marcus Christie turned on Phil and stole his money, Ritchie has proved a loyal ally of the Mitchell clan.

But things did turn ugly between her and Phil in 2015 when she refused to help him after he tampered with the brakes on a car, almost killing cousin Ronnie Mitchell.

Phil stole Ritchie’s black book of criminal clients and made threats against her unless she did as he said.

And it’s not just the Mitchells she helps, she helped to free Mick Carter after he was accused of shooting Stuart Highway.

She also represented Bobby Beale when he was arreseted for assaulting his mum, Jane Beale, and killing his sister Lucy.

The last time Ritchie was in Walford was when she helped Phil change his will. The act cut Ben out from receiving any inheritance and instead provided for Keanu Taylor.

Keanu was engaged to Phil’s daughter Louise at the time and they had a baby on the way.

What Phil didn’t know was that Keanu had also got Phil’s wife, Sharon, pregnant.

When Phil found out the truth at Christmas, he ordered Keanu’s death, however, Keanu survived and went into hiding.

Keanu returned during the 35th anniversary celebrations and his showdown with Phil on the boat led to the vessel crashing. And we all know what happened next…