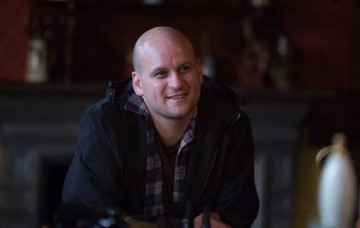 Some fans had their doubts, but Linda Carter has been rooting for her husband Mick all along.

Ever since creepy Stuart Highway arrived on the scene, Linda has known he’s bad news…

When the horrible weirdo set up a plan to shoot himself – Yes! Really! – and get his so-called best mate Mick sent down for attempted murder, fans were horrified when Linda appeared to abandon him and sided with Stuart.

But the doubters were wrong, because Linda has been hatching a plan all along to vindicate her beloved husband.

In fact, in a bid to truly convince Stuart she was on his side – and ultimately to confess his sins – she even kissed him.

But it’s all part of Linda’s grand plan to expose Stuart – a plan which comes to a head tonight (Thursday 13 December).

In the two-hander episode, Linda tries to get a confession out of Stuart – but, of course, we all know it won’t be that easy.

And if Stuart discovers Linda’s plan, she could be in very big trouble indeed – especially as he appears to be genuinely falling for her.

Actor Ricky Champ has teased that the episode will be “intense” as Linda goes one step further to extract that all important truth.

Speaking to Metro.co.uk, he teased a big twist saying: “How the episode is left, Stuart is scrambling to get out of it, but initially before any of that there’s a real shame here with Stuart.

“Whilst he has been softened on the outside with Linda and he’s gone into this with a clear idea of what he wants to do and have Linda, and then all of a sudden we see Stuart leading up to this two hander when his defences are down, when he’s most vulnerable.

“He’s been completely duped. I was playing falling, he was falling for Linda. And maybe it comes out he’s always loved Linda, just the same as he’s always loved Mick. The antithesis is that Mick has been hardened in prison, so when the two of them should meet again, you’ll see something very different.”

Ricky also teased that the scenes get physical, saying: “And when you’re doing physical stuff you have to make the choices together and it’s a real privilege when it’s with someone like Kellie Bright. She was great to work with.”

Spoilers tell us that Mick Carter is back in the hood soon, so does this mean Linda gets the confession she needs?

And where does that leave Stuart?

Do you have any sympathy for Stuart Highway? Leave us a comment on our Facebook page @EntertainmentDailyFix and let us know what you think!