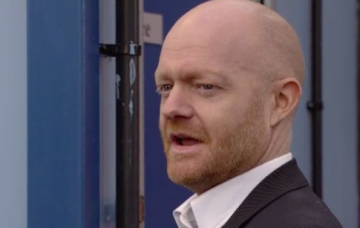 There’s been a Max Branning-shaped hole in Walford for a while now, but not for much longer we’re glad to reveal.

The shady car salesman is winging his way back to Albert Square in the not too distant future, EastEnders have confirmed.

Max will be back on screen during the week beginning Monday May 6 – but there won’t be much of a welcome party for him.

Far from it, in fact, as he immediately begins battling with his wife Rainie over their future.

Viewers know that, although the pair are married, the wedding was a sham to help Max get custody of his estranged daughter Abi.

We last saw Max in February, when he left the Square as part of the Mel Owen murder cover-up plot.

As Mel sought revenge on ex-boyfriend Jack for his role in incriminating her son Hunter, a panicked Max realised he needed to get Jack out of Walford quickly.

Planning to escape to France, Max told Masood that he’d consider an offer to buy out his share in the restaurant once he got to France – leaving Rainie gobsmacked that he left the Square without her.

Appearing on Loose Women before Christmas, he explained he was taking “a few months off”.

He said: “I love being there. I love the job, but it is very demanding.

“It’s long hours and I’ve got a family, two kids at home, and a beautiful wife I probably don’t see enough of.”

Jake was initially due to go on tour with his boxing podcast Pound For Pound during his break, but the live shows were later cancelled due to “unforeseen circumstances”.

The actor is due to run the London Marathon this weekend, in honour of former co-star Barbara Windsor who is battling dementia.

Have you missed Max? Leave us a comment on our Facebook page @EntertainmentDailyFix and let us know what you think!