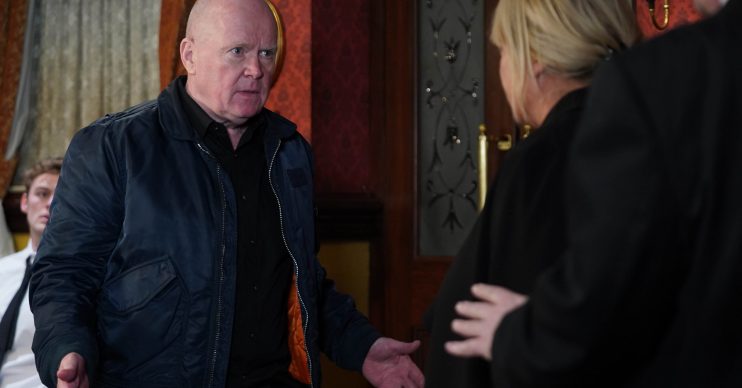 But will they get back together?

EastEnders viewers were left stunned after Phil and Sharon kissed in last night’s episode (Monday, April 6) and are convinced they’re going to run The Vic together.

At first Sharon didn’t want to speak to Phil. But eventually the pair found themselves reminiscing about the good memories they have with Dennis.

Feeling guilty and blaming his fight with Keanu for the boat crash, and Dennis’s death, Phil decided to hand himself into the police.

In last night’s episode, Phil turned himself in but solicitor Ritchie told Phil’s son, Ben, that Phil could be facing life in prison.

At Christmas, Sharon told the police she believed Phil had Keanu killed.

Knowing the only way to stop Phil from going to prison is if Sharon retracted her statement, Ben begged his stepmother to go to the police and take back what she had said.

Although Phil was prepared to be punished, he was shocked to be let go. He later discovered that Sharon is reason he is free.

He paid his wife a visit and Sharon told Phil that he was a good dad to Dennis.

Sharon explained to Phil they couldn’t keep blaming themselves for Dennis dying and she couldn’t face losing Phil too.

#EastEnders can't believe Sharon took Phil back. I guess then they're setting for Ian to take full blame for Denny's death. Ridiculous

Others are convinced that they will get back together and buy the Vic.

Phil still the best character in #EastEnders Hope him & Sharon get the Vic like the old days.

i just know sharon and phil are going to be the ones running the vic but how long do you think it’ll take for phil to burn it down again? i’d give it six months #EastEnders

Phil and Sharon belong together. And it looks like they will own the Vic next. Love it! #EastEnders pic.twitter.com/Sx81sCK8iC

The only way this should go: Sharon makes Phil buy the Vic for her, then divorces him and takes it all for herself. #EastEnders

Phil and Sharon gonna run the pub me thinks #eastenders

Are Sharon and Phil getting back together?

Fans of the show know Sharon and Phil have had a rocky relationship.

Although Phil and Sharon had a bitter split, Dennis’s death seems to have brought them back to one another.

But whether they’ll get back together and become a couple again remains to be seen.

How did Dennis die?

Dennis died as a result of drowning.

On the day of The Queen Vic boat party, Ian Beale found out that Dennis was the one behind the online abuse campaigns about his son Bobby.

Wanting to take Dennis to the police when the boat docked, Ian locked him in a room on the boat’s lower deck.

As Dennis left a voicemail for Sharon telling him what Ian had done, Phil and Keanu got into a fight on the top of the boat.

They ended up knocking the boat controls and the boat crashed, taking on water.

Although Ian immediately tried to save Dennis and managed to get him out of the room, a surge of water caused Dennis to drown.