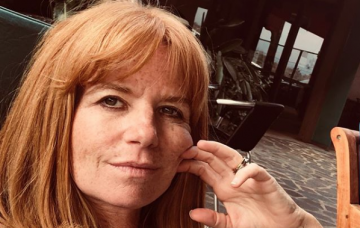 She shared a throwback snap of them together

Patsy Palmer has suggested Tiffany Mitchell should be brought back from the dead for an EastEnders reunion.

On Instagram, Patsy posted a 90s throwback picture of herself and Tiffany actress Martine McCutcheon kissing.

She captioned the picture: “Maybe they should being Tiffany back from the dead …. @martinemccutcheon #eastenders #90’s #classic #kissing”

Martine played Tiffany from 1995 to 1999 and her character was very close to Patsy’s character Bianca Jackson.

Martine was married to Grant Mitchell and had a daughter named Courtney.

Tiffany was in hospital after she fell down the stairs resulting in a blood clot.

Everyone was convinced Grant pushed her and corrupt copper Beppe persuaded her to go along with lie, whilst withholding evidence proving Grant hadn’t pushed her.

Grant was sent to prison, but was released on bail as Tiffany planned to leave Albert Square with Courtney.

Hearing her plan, Grant took Courtney and left, but a hysterical Tiffany ran straight into an oncoming vehicle driven by Frank Butcher and died at the scene.

Read More: EastEnders viewers brand Louise ‘spoilt’ as she encourages boyfriend Keanu to turn to a life of crime

Patsy has played Bianca from 1993 till 1999 before returning in 2008 with her children Liam, Tiffany, Morgan and her adopted daughter, Whitney Dean.

She left again in 2014 to live in Milton Keynes with her new boyfriend Terry, his two children TJ and Rosie, and her children Tiffany and Morgan.

Her oldest son Liam stayed and eventually went to live in Germany with his dad Ricky.

Eventually Terry returned to pick up his granddaughter, TJ’s daughter Beth, who he had with Cindy.