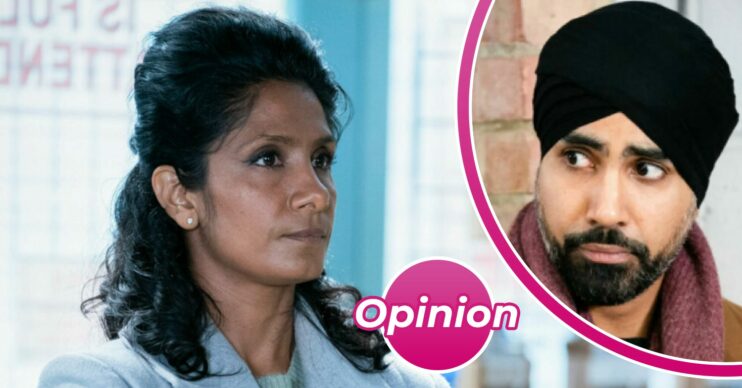 EastEnders OPINION: The Panesars are the best thing in Walford

EastEnders is struggling and struggling bad but it has one thing going for it that could save it – the Panesars.

Now when the family first arrived in Walford they were hardly an exciting addition to the fold.

Ash the junior doctor wasn’t exactly the sort of character you could imagine a family being built around – what with her being incredibly dull.

But soap bosses managed it – mostly.

Kheerat, Vinny and Jags turned up as an enemy of the Mitchells after Ben had their car stolen.

In retaliation they kidnapped Lola Pearce and sparked off the shortest war ever.

And then Queen Suki arrived with the tragic news she was dying of terminal cancer.

It was all lies of course, designed to manipulate her children into forgiving her for being a terrible and controlling mother.

In short the entire introduction was a mess and thankfully EastEnders seemed to realise that.

Suki’s lies were exposed – and quickly forgotten – Kheerat underwent a personality transplant and was humanised.

Vinny has ceased to be annoying most of the time and he had a hair cut and shaved his beard, thus saving him from being too awful.

Ash was packed off for months at a time, saving us all from her woe is me bleating.

And Jags was mercifully killed off and so we never have to think of that truly terrible character again.

Yes the family is completely split because Suki technically killed her son with her punishment of sending him to prison, but they are a brilliant addition to the Square.

Kheerat is more than a mummy’s boy

Kheerat has proved to be both a worthy villain and a kind and decent man.

And his relationship with Stacey Slater has made them both much less annoying characters.

Suki is capable of standing up to Phil Mitchell, ruling over her empire with an iron fist, but also falling in love with Eve Unwin.

The less said about Vinny and Ash the better, but they are not Jags, so they get points for that.

But the Panesars have become the best thing about EastEnders.

And with the inevitable arrival of their cruel and abusive dad – things are only just getting started.