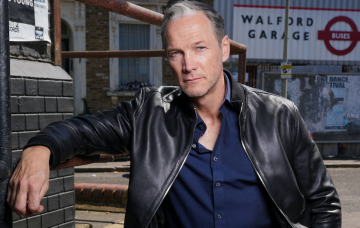 Mel Owen’s ex husband arrives in Walford next week but, as with most newcomers, he’s got a sinister side that’s just waiting to be explored.

And with family like Ciara Maguire, who was bought into the soap at the start of the year as part of Aidan Maguire’s heist money storyline, it’s no surprise that Ray could bring trouble to Walford.

The moment that Ray arrives couldn’t be worse timing for poor Jack Branning.

He’s right in the middle of a romantic proposal where he’s asking Mel to become his wife. But before she can answer his question, Ray walks in and ruins everything.

Of course the whole thing was organised by Mel’s scheming son Hunter. No surprise there, then!

“Ray returns to Walford to make good with his family. Everything is unresolved, so he comes back to put things right.”

Talking of his on-screen sister Ciara, Sean doesn’t think Ray is too dissimilar to his sibling: “The apple doesn’t fall far from the tree, so certainly they’re not a family to shy away from different measures to get what they want.”

Ray quickly gets the measure of Jack, and instead of seeing him as a love rival, Ray quickly makes a move to befriend him…

“Ray is very used to creating situations to work in his favour, so certainly with Jack, or anybody, if he is motivated to it, he is able to handle it without feeling a huge sense of threat.”

So will Ray’s presence mean it’s the end of the line for Jack and Mel? Or is this a new Walford love triangle just waiting to happen?

Catch Ray’s arrival on Thursday 4th September, 7.30 on BBC One.

Are you looking forward to Ray’s arrival? Leave us a comment on our Facebook page @EntertainmentDailyFix and let us know what you think!