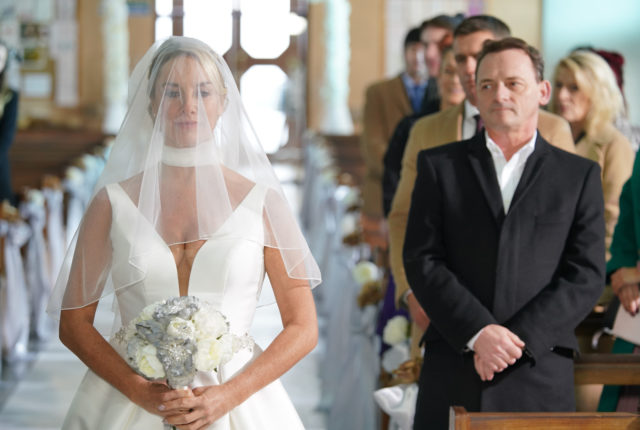 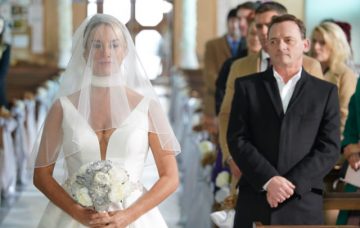 Who will face the biggest shock?

EastEnder Mel Owen has been pictured arriving at the church ahead of her eagerly awaited wedding day showdown with fiance Ray Kelly.

The images unveiled by the BBC soap show Mel (Tamzin Outhwaite) underneath an arch of flowers, clutching a bouquet.

While she is glowing like any bride in the first look snaps, Mel is actually plotting revenge on Ray (Sean Mahon) after discovering he has been hiding plenty of secrets and actually has two other women in his life.

The guests have no idea she is planning to use her big day to get her own back.

But what exactly does Mel have planned and will Ray realise what she is up to?

As the ceremony gets under way, events quickly spiral out of control leading to an explosive series of events.

Will the surprises all be on Mel though? Yesterday we revealed a very intriguing fan theory about Ray.

Think about it a second and actually this idea doesn’t seem all that implausible.

Read more: Mel gets revenge on her wedding day

Steve ‘died’ in a car explosion, but we never saw a body. Mel left Walford for ages, maybe to follow Steve, who needed to be presumed dead.

Hunter is exceptionally close to Ray, like a son and father, it goes beyond normal stepson and stepfather bonds…

The notion was started by a fan, who pointed out the resemblance between Ray and Steve (maybe Mel just really has a type!), and put forward the idea that Steve had undergone reconstructive surgery (and been put through and Irish accent wash) to become Ray.

Look at the resemblance!! Also look at Ray’s nose as well, that’s 100% meant to be a rhinoplasty… and also the fact Ray has a mysterious scar on his leg and how much he dotes over Mel’s son, sorry but I’m convinced!! pic.twitter.com/5TFWfu2SHc

Who watches EastEnders? I think Ray (Mel’s husband) is actually Steve Owen – he didn’t die in the fire from that car explosion and actually got reconstructive facial surgery and is back for revenge

And other viewers quickly latched on…

Listen, I’m convinced! This is now a fact to me

To further lend some weight to the idea, when Tamzin Outhwaite first returned to EastEnders earlier this year, she hinted that Steve could still be alive.

Talking about her character’s husband, who seemingly perished in the blaze 16 years ago, Tamzin said:  “I do think he could have got out in that three seconds and rolled underneath the car.”

And there’s more, in the high-octane trailer for the New Year episodes, Hunter can be heard shouting: “No, no, Dad, no!”

What do you think of the theory? Leave us a comment on our Facebook page @EntertainmentDailyFix and let us know.