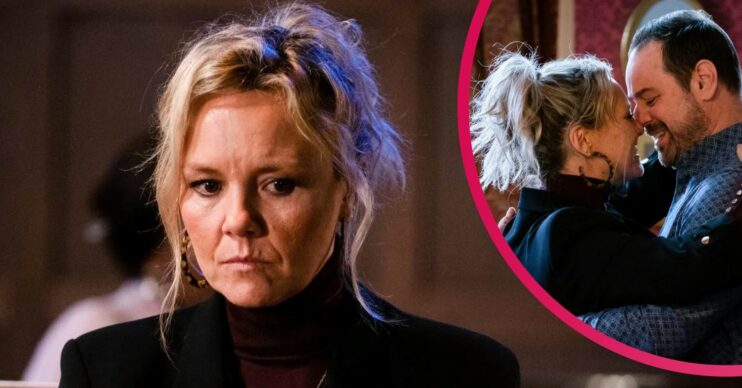 Mick's got a new woman – but EastEnders history proves Janine may be the death of him...

We’ve now seen EastEnders‘ Mick and Janine declare their love for each other. They even sealed the deal with a kiss right in the middle of Albert Square.

So, it seems it’s all over for Mick and wife Linda, following Linda’s drunken antics at Tina’s funeral.

However, residents aren’t convinced that Janine is the best option for the next Mrs Carter – and that’s hardly surprising.

It’s not just Mick’s emotional welfare people are concerned about. Locals like Sharon are aghast at seeing Mick and Janine together, mainly because they know Janine of old.

Over the years, we’ve seen Janine leave three dead husbands behind her, plus a trail of other shattered lives. Could Mick be in deadly danger given Janine’s killer past?

As EastEnders Mick and Janine embark on their new life, who are the unlucky fellas who have gone before?

And what lessons can Mick learn from the ones who lived to tell the tale?

Read more: Who are the cast taking part in The Simpler Life on Channel 4?

Like Mick, Janine’s first conquest was a resident of the Queen Vic – Mitchell pin-up boy, Jamie.

In a bit of a soft-launch for her life ruining lives, Janine seduced Jamie, taking his virginity. But she was soon bad-mouthing his sexual prowess to anyone who would listen.

She may have humiliated him, but Janine wasn’t the one responsible for Jamie’s untimely death. That one was down to Martin Fowler’s driving and a distracting text message on his Nokia 320…

Janine seems serious about Mick, and she has been capable of loyalty of sorts over the years. She went for Billy like a rat up a drainpipe when the loveable loser came into a bit of cash for once in his life.

And she departed just as quickly when the dosh ran out.

However, the pair have always been close. Although Janine berates Billy at any opportunity, she can open up to him in a way she can’t with many.

Billy is often her only supporter when her evil deeds cause big drama, and Janine appreciates that. Well, in her own special way.

Janine and the equally-slippery Paul Trueman planned to fleece gullible Barry Evans. Using her womanly charms, she got Barry on side.

She then stepped things up after discovering he had a heart issue.

But when Barry turned out to have a clean bill of health, a furious Janine unleashed her anger.

The groom’s dream honeymoon turned into a nightmare, as Janine pushed him down a steep slope. Barry’s head hit a rock, and Janine claimed her first victim. But she’d soon get used to playing the merry widow…

Who was Janine’s husband David?

Janine took her marrying-for-money hobby to a whole new level when she wed David, an elderly and very rich Jewish fella.

She even took on a whole new identity, as Judith Bernstein (an alter ego she still uses to this day for any dodgy activities).

The pair’s ceremony was rather rudely interrupted by Pat, however. Her stepmum famously announced to the the room that Janine was ‘about as Jewish as a bacon sandwich!’

David collapsed in shock and died. Janine was a widow once more, but ended up without a penny of David’s money. Leaving her to move onto her next victim…

Mick and Janine’s romance is all down to him giving her benefit of the doubt, despite her dubious past. And it turns out Janine isn’t always the guilty party.

Back when she shacked up with evil Mitchell dad Archie, she was delighted to get her hands on The Queen Vic. But Janine was angry and humiliated when he threw her out on Christmas Day.

Archie was later found dead, and Janine was the prime suspect for his murder. But for once, she didn’t do it. Stacey dealt the killer blow.

Ryan is the hubby that got away… just!

Janine fell for Whit’s brother, and the pair wed. But Janine was furious when his fling with Stacey resulted in Ryan fathering her baby.

She took revenge and poisoned Ryan, nearly finishing him off.

When she was caught out, she stabbed herself and framed Stacey for the attack, causing her enemy to flee the country.

Ryan got his own back on Janine, almost killing her in her hospital bed. But he later left Walford, before Janine could mount a counter-attack. Sensible move.

Janine’s fourth husband suffered the traditional Janine Butcher grisly end, but not before he at least knocked her up with baby Scarlett.

However, motherhood did not mellow Janine.

A battle ensued over the baby girl, and Michael proved himself to be as twisted as his wife, plotting to kill Janine.

But as shock showdown ensued, it was Michael who was left dead – stabbed by Janine – with Scarlett’s nanny Alice handily in the frame to take the blame.

Read more: Who’s in the cast of Emmerdale 2022? Meet them all here!

…and what about her and Mick?

What will the future hold for EastEnders Janine and Mick as they embark on their new romance?

Mick will make a dramatic exit from Walford later this year following actor Danny Dyer quitting EastEnders. So, will the black widow of Walford strike again?

Show bosses are staying tight-lipped on how Mick will blast out of Albert Square, but it whatever drama is ahead, you can guarantee Janine will be in it right up to her neck!