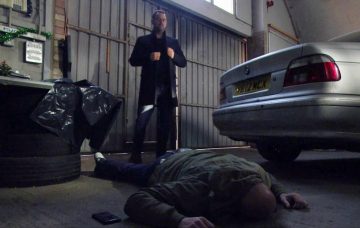 Will he kill him? Fans hope so!

EastEnders fans got what they really, really wanted last night, when Stuart Highway FINALLY got a taste of his own medicine…

During Thursday night’s show (20 December), a vengeful Mick Carter kicked off his payback plan – and BBC viewers couldn’t have been happier to see Sicko Stuart given some rough justice.

Ever since Mick was release from prison after being set up by his so-called former friend, it’s been clear from his troubled expression that he’s been plotting to bring Stuart down.

And the landlord put his plan into motion when he tricked Stuart into arriving at The Arches – with the help of Phil.

When Stuart turned up at the garage, Mick was waiting for him and bashed him over the head with a heavy object…

As his nemesis lay unconscious, Mick quickly bound and gagged him before putting him in the boot of his car for a little not-so-festive trip.

In a sweet twist, Mick put on the very same song that Stuart played when he tortured Mick’s auntie Tina in exactly the same way many years ago in a cruel stunt (for trivia geeks, it was D Mob’s We Call It Acieed).

A scared Stuart woke up in time to see Mick slam the boot down, promising him “a sleigh ride” with a difference.

Fans were whooping with joy at Stuart’s abduction, and many – we mean thousands – even hope that Mick finishes Stuart off!

As the episode finished on a delicious cliffhanger, viewers were quick to tweet their thoughts on social media.

One said: “Yes, Mick! You absolute diamond! It’s about time that Stuart muppet got knocked down a peg or two!! My god, I’ve missed you!! #EastEnders @MrDDyer.”

Another said: “Go’awn Mick! Give him hell. Waited months for this moment! It’s about time the tables turned.”

This Mick revenge storyline is looking like it’s gonna be a cracker!#EastEnders

Go’awn Mick! Give him hell. Waited months for this moment! It’s about time the tables turned. #EastEnders

Yes, Mick! You absolute diamond! It’s about time that Stuart muppet got knocked down a peg or two!! My god, I’ve missed you!! #EastEnders @MrDDyer

I'm totally all here for Mick getting his revenge. *yells* Go on my son! #eastenders

A third wrote: “This Mick revenge storyline is looking like it’s gonna be a cracker!”

But how far will Mick go to wipe that smug smile off of Stuart’s face?

He’a already declared that Stuart “is a dead man” – but will he actually KILL him and risk going to jail again?

In a recent interview with the Radio Times, actor Ricky Champ teased that “viewers won’t be disappointed” with his character Stuart’s comeuppance.

He said: “As far as pay-off goes, you’re going to get it. I’m really excited for people to see it. A lot of work went into this period of EastEnders and it did feel particularly overwhelming at times.

“But it’s fun to play Stuart; someone who is that unpredictable is a very dangerous man and that’s where his power lies. He loves Linda and Mick, but this is a man who destroys what he loves.

“And the uncertainty of what he’s going to do makes him watchable.”

Do you think Mick should or will kill Stuart? Leave us a comment on our Facebook page @EntertainmentDailyFix and let us know what you think!