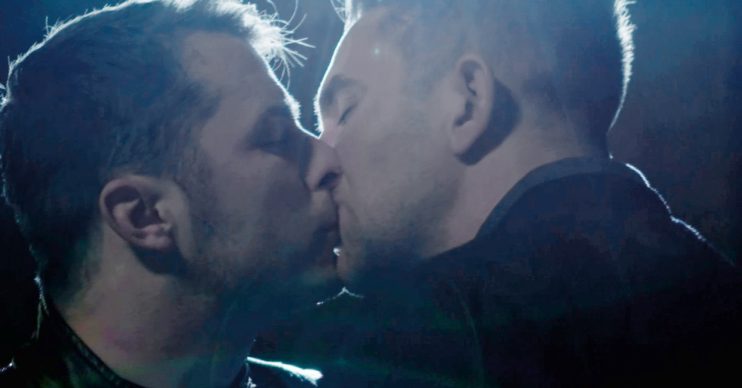 The couple first kissed a year ago

Fans of EastEnders have become emotional at the first anniversary of Ben and Callum’s first kiss.

Fans of the couple – made up of Ben Mitchell and Callum Highway – were sent wild when actor Max Bowden brought the anniversary to their attention.

Wow, is that right? A year ago we filmed that!? Hours out in the cold snogging each other’s faces off @tony_clay76. What a year this little journeys been so far son!The best onscreen partner anyone could ask for! Love ya kid! https://t.co/DR2p86DTfz

Max posted about on “snogging Tony Clay’s face off” on the one-year anniversary of the scene.

Callum was engaged to unlucky in love Whitney at the time and Ben decided to help him come out – in his own way.

After months of flirtation and charged encounters, Callum tracked Ben down in a park late at night and they shared their first kiss – and more.

An EastEnders fan account tweeted scene, writing: “This scene was filmed a year ago!”

Max retweeted and added more detail, adding: “Wow, is that right? A year ago we filmed that!? Hours out in the cold snogging each other’s faces off @tony_clay76

“What a year this little journey’s been so far, son! The best onscreen partner anyone could ask for! Love ya kid!”

Fans are emotional after the post with one writing: “It’s fine. I’m fine. Everything is fine. I am not going to cry.”

A second said: “What a year you have given us. We’re so lucky to have you both. Long may it continue!”

The relationship has become a firm soap favourite with thousands of fans “shipping” them as Ballum.

After their first kiss Callum tried to hide his feelings and still tried to go through with his wedding to Whitney.

Luckily for him, she stopped it during the ceremony and then she tried to out him in front of their friends and families at the reception.

However, she couldn’t as Ben was soon shot by Hunter Owen during the siege.

She watched Callum fight to keep Ben alive and eventually gave them her blessing.

Most recently fans went wild as Ben finally told Callum he loved him after they spent an evening together sorting out their issues.