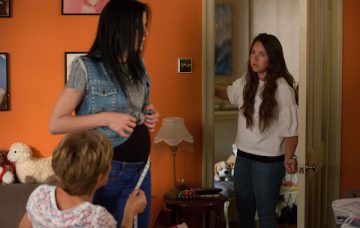 EastEnders’ Martin and Stacey to split due to Hayley baby bombshell?

Stacey and Martin Fowler’s marriage looks like it will come under strain yet again after she worries he has been playing away.

The mum-of-three frets her husband could be the father of Hayley Slater’s unborn child, completely unaware the dad is actually Alfie Moon.

But that won’t prevent her concerns weighing on her mind – and eventually Stacey snaps.

Demanding answers from her cousin, Stacey nearly drives her away from Albert Square with her insistent enquiries.

Hayley denies Martin has anything to do with her baby, but Stacey continues to doubt her – and him – after Jean attempts to swear Stacey to secrecy.

If Stacey won’t accept Hayley’s word for it, will she believe Martin?

The couple’s relationship has been a stormy one, ever since they first got together in 2014 after being flatmates and were eventually married in 2017.

Indeed, they were only reunited three months ago after Stacey’s revived affair with Max Branning was discovered last December.

He certainly fits the description of the mystery dad to Hayley’s bump – the married man of a friend.

Stacey even confronts Kush while Martin is out with their kids, but he denies knowing anything about anything.

But when has a lack of information ever stopped a soap character coming to life-changing conclusions?