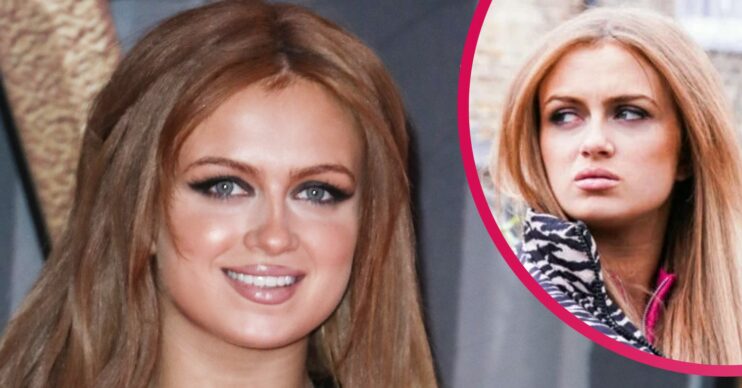 EastEnders: Has Maisie Smith left for good? What is she doing next?

Tiffany Butcher-Baker made a reappearance tonight

As she and Keegan reunited and exited the Square for a new life together, fans finally got the ending they were hoping for for the pair.

But is this the last we’ll see of Maisie in EastEnders? And what is she doing next?

Who is Maisie Smith? How old is she?

Maisie Smith is an actress best-known for playing Tiffany Butcher-Baker in EastEnders.

She first joined the cast of EastEnders in April 2008 as the daughter of Bianca Jackson who was returning to the show.

Maisie was just six years old when she joined the soap. She stayed until 2014 before leaving. Tiff then returned to the Square in 2018.

But trouble struck their marriage when he cheated with Dotty and the pair split.

When did Tiffany leave EastEnders?

Tiff decided to quit Walford for good in 2021 and move to Germany with brother Liam.

However, she still loved Keegan, despite having served him divorce papers.

In a farewell note to Keegs she told him she’d stay if he wanted to give things another shot.

In a cruel twist of fate, Liam found the letter first and destroyed it, so Keegan thought she no longer wanted him.

After waiting at the tube station for Keegan, who never showed up, Tiffany left in December 2021.

Will Maisie Smith return to EastEnders?

Maisie made a one-off return tonight for Keegan’s exit.

Struggling since he discovered his sister, Chantelle, had been abused and killed by her husband Gray, Keegan had lashed out and set fire to his van.

As the police closed in on him investigating it as arson, Tiff appeared in the nick of time and gave her former husband an alibi.

Sitting with him in the Square, she tried to offer him some comfort over Chantelle, but she felt he didn’t seem to want her there.

Tiffany decided to go straight back to Germany, but Whitney insisted this time she had to say a proper goodbye to Keegan.

That was when the truth over the letter came out. Tiff was stunned when she realised Liam had taken away her chance of happiness.

But as Keegan kissed her, he very quickly decided it was time to bid farewell to Walford and start their life together again in Germany.

After a tearful goodbye with family, Keegan and Tiffany left Walford to the sound of Julia’s theme.

This is the last we will see of the couple for the foreseeable future as both actors have left the show.

Keegan actor Zack Morris confirmed in an Instagram post he had quit the show after five years to explore other opportunities.

Meanwhile, Maisie’s return was only ever for one episode for Zack’s exit story.

What is Maisie Smith doing now?

Maisie hasn’t confirmed her next role, but it’s been reported she has landed a job presenting.

She’s set to star alongside Alison Hammond and Vernon Kay on Friends Like These. It’s a remake of the programme originally presented by Ant and Dec.

The show will see two teams of five friends competing against each other in head-to-head challenges. The end goal is a holiday.

Maisie is expected to be a team captain on the show, while Alison and Vernon will do the traditional presenting.

A source told The Sun Online: “Maisie has just filmed a pilot episode and it’s unclear if it’ll air but it’s a great sign she’s landing these kind of shows after Strictly and EastEnders.

“Everyone thought she was really great on the show – she’s so naturally funny – so it’ll be the first of many new jobs.”

She has recently finished starring in the Strictly Come Dancing tour, where she replaced AJ Odudu who was injured.

Maisie appeared on Strictly in 2020 and reached the final with partner Gorka Marquez. She lost out on the glitterball trophy to winner Bill Bailey and his partner Oti Mabuse.

The talented dancer has also recently been seen putting Gethin Jones and Sam Quek through their paces on Morning Live.

Maisie taught a dance workout on the show to keep viewers – and the presenters – fit.