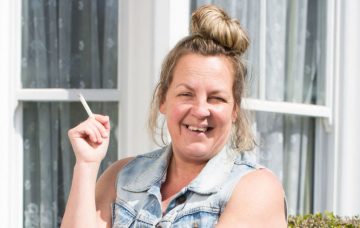 Karen's costume might be easy to throw on, but it's hardly glamorous for Lorraine

Lorraine Stanley has admitted she looks “awful” in EastEnders.

The actress has to strip away all of her glamour to play bra-strap showing launderette assistant Karen Taylor in the BBC soap and she is painfully aware of it.

But she has revealed she doesn’t mind a bit because it’s great for her skin.

She told the Sunday Mirror: “I don’t wear a scrap of make up, not even foundation. It’s probably really good for my skin.

Read more: EastEnders ‘vilest ever character’ to return at Christmas for explosive episode

Karen’s controversial bra straps being out and adjusted every other minute caused a minor sensation with viewers when she first arrived in Walford.

Now Lorraine has revealed it was all her idea.

“I pushed for the bra straps on show and the very tight fitting stuff when I first joined,” she added.

“She’s a big woman who shows her curves. I cover mine but Karen couldn’t care less. Plus I’ve never played glamorous roles on telly so I’m used to seeing myself and thinking ‘Oh my God you look awful.’

“Although sometimes if my fella is sat next to me and he has Eastenders on I’ll say, ‘Don’t look at me on screen.’ He knows I’m a sort in real life though.”

And even though Karen has been compared to Kathy Burke’s famous creation Waynetta Slob, Lorraine loves it being she “adores her”.

And when she met Kathy backstage at a play she was performing in, Lorraine was thrilled.

She explained: “When I met her afterwards she said, ‘What’s it like being compared to me all the [expletive] time?’

“I said, ‘It’s amazing because you’re my idol.’ There’s no one better to be compared to for me.”