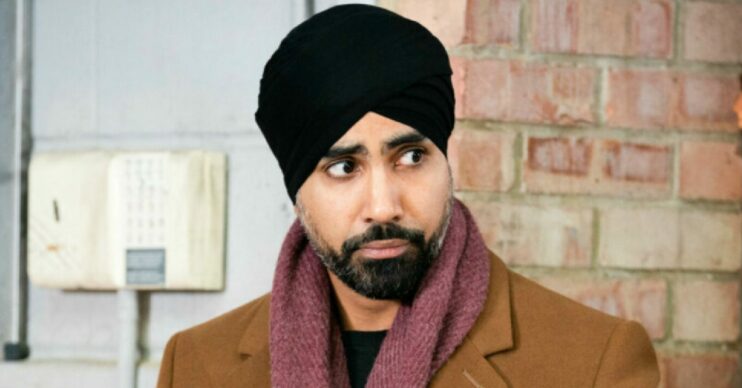 What does EastEnders’ Kheerat Panesar look like out of character? Who is actor Jaz Deol?

EastEnders star Jaz Deol was an instant hit with fans when he was was first introduced in October 2019, but many are curious what Kheerat looks like without his turban.

The character has certainly made a name for himself on Albert Square, and has been part of some of the biggest storylines on the BBC One soap.

But behind his character, fans may be wondering what actor Jaz looks like in real life.

In the soap, Kheerat is known for wearing a turban as part of his Sikh heritage.

However, Jaz shows off his hair in real life.

The soap star often documents his life by sharing snaps of himself on Instagram.

Back in August last year, Jaz posted a snap of himself alongside his soap family.

The selfie showed his black hair as he opted for a casual grey hoodie.

Alongside the post, Jaz shared: “I’m not one for selfies but this definitely deserved one. Not only am I lucky to be making my living out of what I love to do but I get to work with these talented group of actors.

“Without them there would be no Panesars. Period. Over the two years, we’ve played and laughed. We truly have become a family.

“But one that wants to challenge the stereotype and really bring a level of authenticity that not only “apane” [‘our own’] can relate to, but the whole country.”

What else has EastEnders star Jaz Deol appeared in?

His other television gigs include Code of a Killer, Together and The Halcyon.

The actor landed the role of Kheerat in EastEnders in 2019.

Ahead of joining the BBC One soap, Jaz said: “I’m very proud and excited to be joining such an iconic show and bringing to life a character that is a reflection of the cultural background that I and many others come from in today’s modern Britain.”

Furthermore, Jaz also has a successful second career as a property investor.