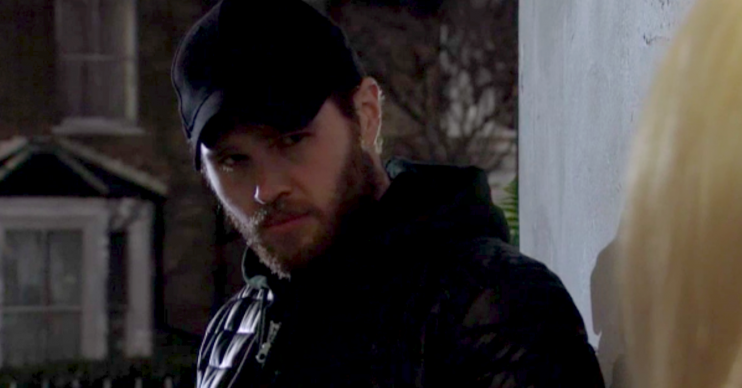 He's back and he wants revenge on the Mitchells

Keanu Taylor is back on EastEnders – and he’s going to destroy Ben Mitchell by blackmailing him for £100k to keep Callum Highway alive.

Last night Keanu made his shock comeback to the Square for revenge on Ben – and told Sharon that he wanted her to run away with him.

She begged him to go back on the run to save his life but he was adamant that he was back for her.

Keanu told her: “I’m not going anywhere. Phil’s gone now. I’ve come back for you, for both of you. I want you to come away with me, now.”

But before Sharon makes her decision, Keanu has a secret plan to get the Mitchells to fund their new start elsewhere – and he’s going to kidnap Callum Highway to make it happen.

Actor Danny Walters said: “Well Ben Mitchell has taken everything from Keanu, he even tried to get Keanu killed, so Keanu is back and he wants to put Ben through what he went through.

“After everything that happened over Christmas, Keanu’s lost everything, his freedom and his family.

“He’s got nothing else to lose, so he has no fear. He’s come back for one reason and he won’t let anyone stand in the way of him achieving his goal.

“It’s essentially like a game of chess, and to get to the King, which Keanu sees Ben as, he needs to go after the most precious thing to him, and that’s Callum…”

Uh oh! And things will only get worse for Ben when he realises Callum is gone and Keanu demands £100,000 to get him back.

A horrified Ben will confront Martin Fowler to get to the bottom of what happened and the truth will surely, finally be revealed.

But with Keanu willing to do whatever it takes to get his family back, will Ben be able to come up with the cash to save his love?

The storyline is set to culminate in the explosive 35th anniversary week of episodes later this month when at least one character will die in the River Thames.

Could Ben or Callum die or will Keanu’s revenge mission come to a watery end?