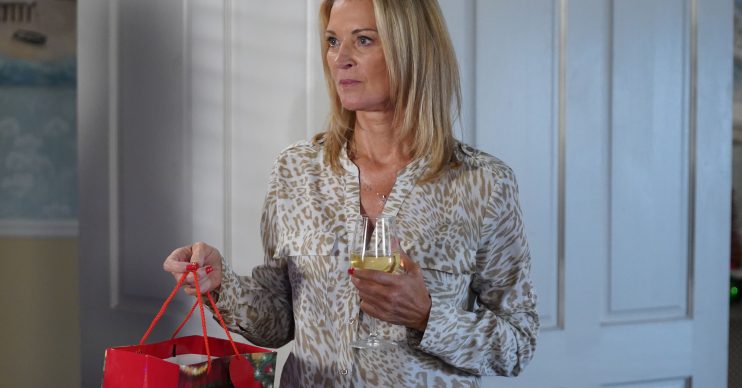 Her new headwear caused a bit of a divide between viewers

In the episode, Albert Square residents gathered to say goodbye to teenager Dennis, who died in the boat accident last month.

Read More: Is Danny Hatchard returning to EastEnders, when is he in Our Girl and does he have a girlfriend?

However as they came onto the Square, viewers were distracted by Kathy’s black fedora hat, comparing her to a ‘mob wife’, ‘Michael Jackson’ and ‘Freddy Krueger’.

What on earth is going on with Kathy's hat?! #EastEnders

We need to talk about Kathy’s hat #eastenders pic.twitter.com/lSbP7LKSCj

What does Kathy look like in that hat! #EastEnders

When the time came for Sharon to give a speech about Dennis, she struggled, prompting Ian to take over.

However at the wake, Albert Square residents were shocked to see Sharon’s estranged husband and Dennis’s adoptive dad, Phil, had returned.

Ever since Sharon found out Phil and Keanu’s fight caused the boat to crash, she has been left furious with Phil, so it comes as no surprise she’s unhappy at his return.

Struggling to remain calm she lashes out at Phil, forcing Ian and Kathy to step in.

However Phil isn’t one to stand back when he wants something.

Later, he is kicking down Ian’s door to talk to Sharon. But it’s not long before Ian calls the police.

Phil leaves before they arrive and soon he finds himself in the Arches.

As Sharon tracks him down, Phil starts to make a decision about his future.

What happens in next week’s EastEnders?

Phil wakes up in a cell after handing himself into the police for his role in the boat crash.

Ben finds out from solicitor Ritchie that Phil is about to confess all. As he prepares to reveal all, Ritchie swoops in.

Can she help Phil?