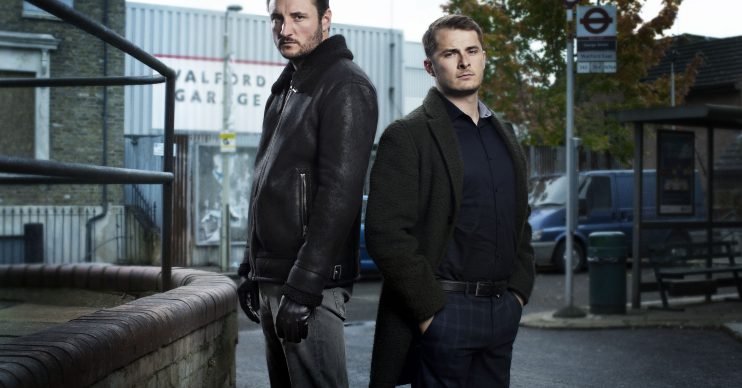 Martin and Ben have had some violent altercations

James, who plays Martin Fowler in the BBC soap, was preparing for the scene where Ben Mitchell, played by Max, dangled Martin off the bridge in order to scare him into working for him.

But as the pair larked around beforehand, James pulled Max up from off the floor and disaster nearly stuck.

Speaking to The Sun Online, James said: “We did one scene, me and Max, and I nearly broke his neck didn’t I?”

Max then added: “It wasn’t in action, that’s why. Not even in rehearsals, just as we were about to go.”

James replied: “I pulled him up a little prematurely, and he weren’t ready and he snapped his neck, and we had a little bit of a fallout didn’t we.”

I pulled him up a little prematurely, and he weren’t ready and he snapped his neck.

He then joked adding: “He got all cocky on set like, ‘I’m the new Ben, I’m gonna take you down’ just to let him know who’s been there longer and who’s the better recast…”

Viewers know Martin got involved with Ben earlier this year.

However, when Martin returned due to his daughter Bex attempting to take her own life, Ben forced him to work for him.

Although Ben has taken a step back from his criminal activities, leaving his employee Tubbs in charge, Martin is still doing jobs for Tubbs.

Read More: EastEnders SPOILER: Phil goes nuts as he finds out the truth on Christmas Eve!

In last night’s episode (December 23 2019) after doing a job, Martin and Tubbs ran someone over, but who was it?