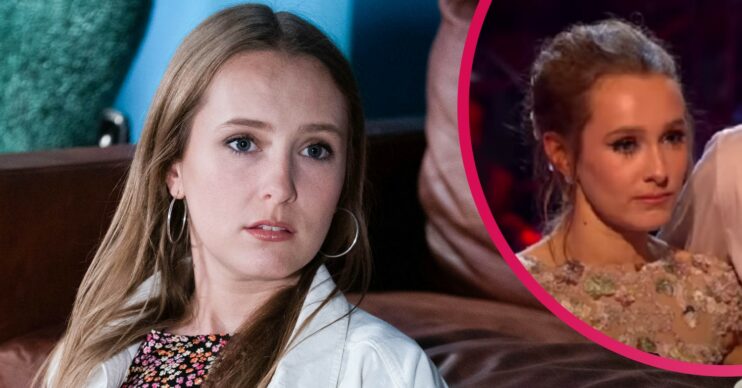 Frankie is currently away from Walford

EastEnders has addressed the reports of Rose Ayling-Ellis will quit after winning Strictly Come Dancing.

On Saturday night (December 18) Rose and her professional dance partner Giovanni Pernice were announced as the 2021 Strictly winners.

Now according to The Sun, executives and producers are lining up high-profile projects for the actress, who plays Frankie Lewis in EastEnders.

Currently Frankie has been temporarily written out of the show and is staying with friends.

However according to the publication cast and crew are expecting Rose to get itchy feet.

Last week it was reported the BBC were lining up a drama with a deaf character in the lead role with a view of casting Rose.

However a spokeswoman for EastEnders told The Sun: “There is no truth in this.”

There is no truth in this.

“Rose has no intention to quit EastEnders and is very much looking forward to filming again in the New Year.”

Why did Frankie leave Walford?

Earlier this year, Frankie met her half-sister Nancy, who returned to Walford after splitting with husband Tamwar.

The two seemed to get on well at first, however when Nancy’s boyfriend Zack took Frankie on a driving lesson, things didn’t go to plan.

With Zack intoxicated, Frankie, who didn’t have her licence at the time, went behind the wheel to take him home.

However she ended up running over Nancy, who was out for an evening run.

Read more: Rose Ayling-Ellis unrecognisable in Casualty appearance – what was her storyline?

Mick discovered what Frankie did and protected her, but when Nancy found out the truth, she was furious.

Nancy was hurt her dad protected Frankie and the two sisters began a feud.

However things went too far when Nancy locked Frankie in the boot of her car and Frankie’s car was stolen by Liam Butcher.

When Frankie returned, Nancy felt terrible and apologised. The two sisters made amends but Frankie said she was going to stay with a friend to give Mick and Nancy some space.

Did you see Rose in the Strictly final? Leave us a comment on our Facebook page @EntertainmentDailyFix and let us know what you think.