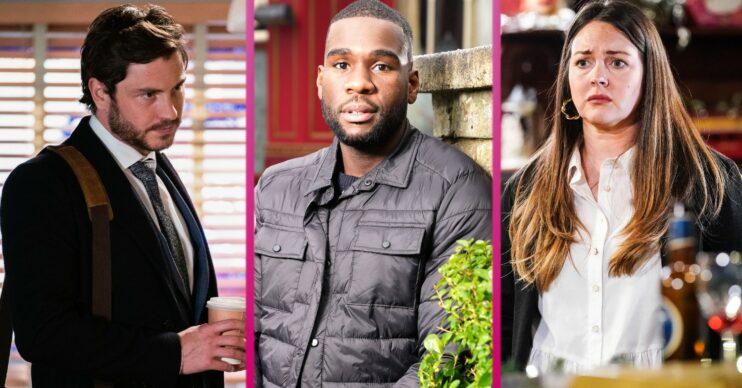 EastEnders in 2021: The highs and lows from Stacey’s new wife, to killer Gray

There's been a lot to love in Walford this year

EastEnders in 2021 has been a mixed bag.

It hasn’t always had a lot of love on social media, but when we sat down to think about what we’ve loved – and what we didn’t enjoy – this year, we discovered there were some cracking storylines.

Here’s what we thought were the highs and lows of EastEnders in 2021:

We can’t lie. When it was revealed that Mick Carter had been abused as a kid, last Christmas, we weren’t immediately on board.

We knew so much about Mick and Linda’s past anyway, that throwing something this massive into the mix felt odd.

But Danny Dyer pulled some amazing performances out of the bag as Mick struggled to come to terms with what had happened to him.

By the time of his abuser Katy Lewis‘s trial, we were fully committed to the story. It was emotive and gripping.

We’re big fans of Mick’s ‘new’ daughter Frankie, too. She’s been a great addition to the Square and the Carter family. We can’t wait for her to come back in the new year.

Yes it’s weird on paper, no Phil‘s not someone we’d ever have imagined Kat being with, but it works, doesn’t it? We don’t know why, but it works.

At least we think they’re great together  – we know not everyone is a fan. What do you think?

Isaac Baptiste‘s battle with schizophrenia was one of the stand-out stories of EastEnders in 2021.

It was clever, and multi-layered, covering institutional racism and the way people with mental health issues are treated by others.

And at the heart of it all was Isaac – played by Stevie Basaula.

His performance as Isaac fell apart was brilliant and thought-provoking. And Lola Pearce – aka Danielle Harold – supporting Isaac was terrific too.

We love Janine Butcher and she belongs in Albert Square, there’s no two ways about it.

Some of her return stories have been more successful than others, we admit.

She definitely doesn’t seem bothered about Scarlett any more, and the stolen cars we could do without.

But how fabulous to see her back behind the bar at the Vic in EastEnders in 2021?

She’s got such good chemistry with Mick Carter, too. We hope nothing romantic happens to ruin their unlikely, but brilliant, friendship.

Every now and then, something happens in EastEnders that genuinely surprises even the most hardcore, seen-it-all-before fan!

And this year, that something was Sonia Fowler‘s long lost dad Terry Cant, known as Rocky, turning out to be Dotty’s Uncle Tom Cotton.

Brian Conley is so likeable as Tom/Rocky that him being revealed to be a total con was a proper shock.

Just as everything seems better when Janine’s in the Square, all’s right with the world when Stacey Slater comes home.

This time she came home with a wife! And we thought ‘whaaaat?!’

Then we met Eve – who is amazing and who we love already – and the plan was explained, and it all fell into place, and we love it.

And we even got a bonus visit from Stacey’s brother, Sean aka Rob Kazinsky. Can’t argue with that.

Aaron and the far-right extremists

Aaron Monroe has arrived in the Square following dad Harvey and sister Dana to Walford.

He’s charming on the surface, but his sinister comments, looks and actions are already stirring up problems for many of Walford’s residents.

Aaron’s arrival is part of a plot examining far-right extremism and so far, we’re enjoying how unsettled and uncomfortable the story is making us.

It’s not easy to watch, but it’s gripping already. And it’s only going to get worse in 2022. We can’t wait!

It can’t all be highs, though, and some things in EastEnders in 2021, just didn’t work for us. Here are the lows from this year:

It was really bold of EastEnders to do a story focusing on female genital mutilation.

But now it seems that’s all Mila and Kioni Marwa are good for. We only ever see them when the plot is revisited – for example when their mum was being sentenced.

We’d love to see more of them, find out more about their lives and how Mila is coping being a mum to her little sister.

Whitney Dean – aka Shona McGarty – has the most incredible singing voice, that’s not in doubt.

But we heard too much of it for a while in EastEnders in 2021.

It seemed not an episode went by without the action being accompanied by Whit’s warbling and frankly we were desperate for her to take that job on the cruise ship.

Whitney stayed in Walford, though and gave up her dreams of cracking the music business.

Now she’s more concerned about Gray than pursing a career on the stage, and we’re very pleased about it.

All the background music

It wasn’t just Whitney’s music that has been playing as the action unfolds on screen in EastEnders this year.

There have been lots of scenes recently where there has been odd music – or even sound effects – in the background.

We’ve not noticed it recently, so perhaps it’s been and gone and that’s got to be a good thing, because we’re not loving it.

Where to begin? Gray murdering Kush was the lowest point of EastEnders in 2021, as far as we’re concerned.

Firstly, it heaped more misery on Whitney’s shoulders when we’re all just desperate for her to be happy.

Then it cemented Gray as a serial killer, completely changing the angle of the story away from its domestic abuse beginnings.

And the stunt itself, while admirably attempted during social distancing and Covid restrictions, was full of plot holes.

Where was everyone else on the platform? What happened to the CCTV? What did the driver see? And why has everyone stopped talking about poor Kush?