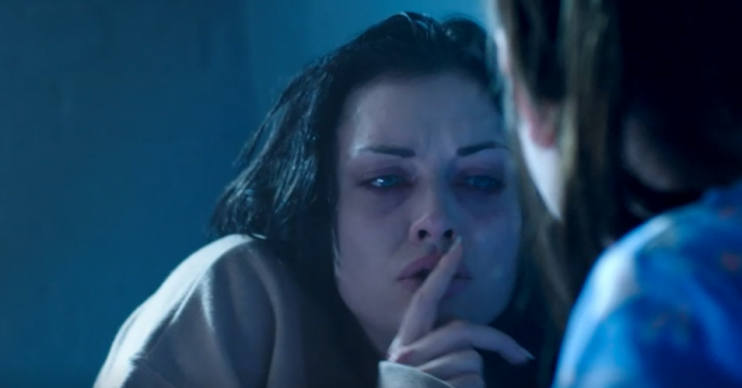 Fans of EastEnders have called last night’s episode of the soap ‘a horror film’ as hallucinating Whitney saw a younger version of herself and heard the voice of paedophile Tony King (Thursday, March 12).

Currently Whitney is in prison after accidentally killing her stalker, Leo King.

As there is no evidence to prove Leo had been stalking Whitney, to those who don’t know her it looks like murder.

In order to get people to listen to her, she has decided to go on a hunger strike which is putting her health in serious danger.

In yesterday’s second episode, the effects of not eating or drinking started to kick in.

She began hallucinating and started to see herself at 12 years old, which is the age she was when Leo’s dad Tony began grooming her.

Whitney began talking as little Whitney listened. She said: “He told me I was beautiful. I was 12. And there he was. He gave me a cuddle. Our special song. I made him whole again. That’s what he said. I was special.”

Turning to little Whitney, she then said: “You ain’t special. You’re nothing. You’re stupid. He’s a grown man. You’re a child. How can that be love? Tell me.”

Meanwhile throughout the scene, she could hear her and Tony’s song Whole Again by Atomic Kitten.

Viewers compared the dark prison scenes to that of a horror film.

OMG with the Whitney story and the Gray and Chantelle storyline, this episode is like a horror film #Eastenders

I’m watching #eastenders for the first time in ages and it’s turned into a horror movie! 😱😱😱 pic.twitter.com/8TNb5sPclo

Honestly wtf is this episode, it’s like we’re in a horror movie #EastEnders

So heartbroken about Whitney poor girl, Chantelle I feel so sad about this whole storyline #eastenders

Whitney continued to hallucinate and warned her younger self to stay away from Tony no matter what, begging her not to believe what he says to her.

Young Whitney soon disappeared as Whitney tried to approach her.

Whitney saw her younger self for a third time and noticed she was wearing bunny pyjamas.

As she sat looking up at the younger version of herself, she said: “It’s tonight. He’s going to sit you on his knee and he’s going to put his hand on your back. Just gently. Just for a few seconds. And it’ll feel beautiful.

“Because someone wants you. That’s how it starts.”

Whitney then began singing Whole Again as she cradled little Whitney in her arms.

Not eating soon got to her and she ended up passing out on her cell floor. Will she be okay?